Wonderful collection of decorative items from the Palazzo and prints, seals and medallions

The Civic Museum is in Piazza del Campo, inside the Palazzo Pubblico (entrance from the Cortile del Podestà), which were built to host the Nine Lords who governed the Republic of Siena.

Inside is a collection of artworks of exceptional value, among which some precious frescoes that are the masterpieces of the greatest Sienese artists: La Maestà (1315) and the Guidoriccio da Fogliano (1328) by Simone Martini in the Sala del Mappamondo(Hall of the Globe), where a fresco was also found, La conquista del castello di Giuncarico (The conquest of the Giuncarico castle), which scholars attribute to Duccio di Boninsegna; Gli Effetti del Buongoverno in città e in campagna (The Effects of Good Governance in the city and in the countryside) and L’Allegoria e gli effetti del cattivo governo(The Allegory and the effects of bad governance) (1339-39) by Ambrogio Lorenzetti in the Sala dei Nove(Hall of the Nine); the cycle Virtù Dei e Uomini Illustri (Virtues, Gods and Illustrious Men) (1413-1414) by Taddeo di Bartolo in the Antechapel.

The great notoriety of these artworks, which are found in all the art history books, threatens to overshadow the extraordinary artistic heritage that is found in every hall of the Civic Museum, with a journey between artworks realized between the fourteenth and the late nineteenth century: in the Sala di Balìa the Sienese Martino Bartolomeo depicted on the vaults between 1407-08, Allegorie e altri personaggi(Allegories and other characters), while Spinello Aretino, helped by his son Parri, during the same years, realized the remarkable challenge of painting, on the walls, the Storie di Alessandro III (Stories of Alexander III) (the Sienese Rolando Bandinelli, Pope from 1159 to 1181).

The Sala del Concistoro(Consistory Hall), accessed through a beautiful fifteenth-century portal, attributed to Rossellino, offers an overview of one of the masterpieces of Italian Mannerism, the cycle of the Virtù pubbliche e dei relativi esempi desunti dalla storia greca e romana(Public Virtues and relevant examples taken from Greek and Roman history), painted by Domenico Beccafumi between 1529 and 1535; in the Chapel you can appreciate the original furnishing that continues to give it an authentically gothic look, mostly thanks to the very beautiful wooden Choir, finely carved and inlaid by Domenico di Niccolò, between 1415 and 1428, which represents, in each of the 21 seats, the various articles of the Credo; the Sala del Risorgimento with great scenes that tell the story of the Savoy and the wars of independence.

The museum itinerary also includes the access to the Loggia dei Nove, on the back of the palace, with very beautiful panoramic view on the Orto de’Pecci and the south of the city. 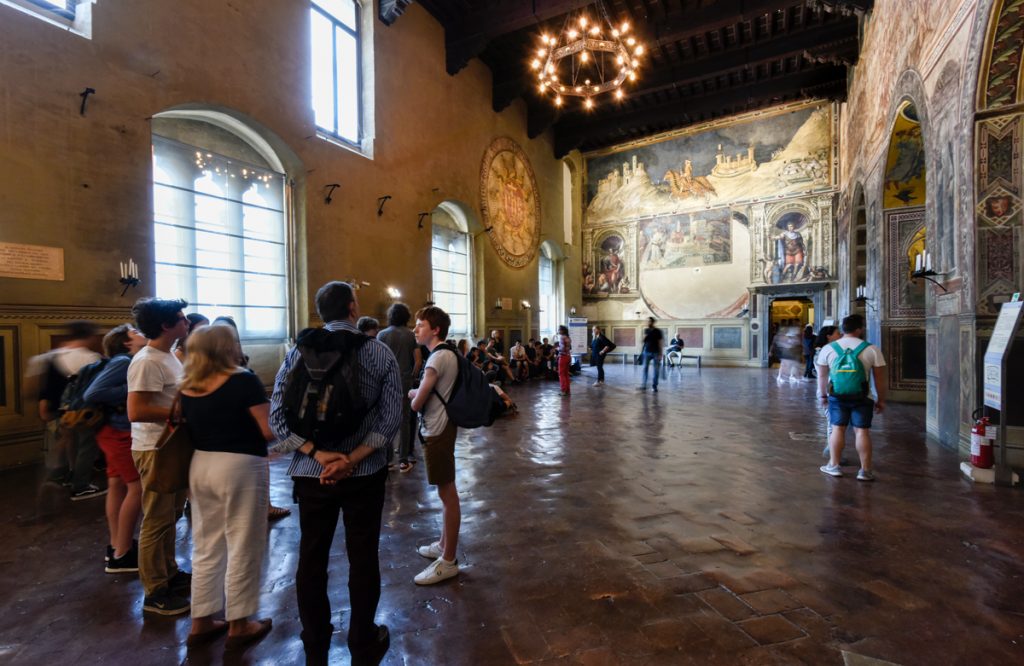