The main gateway to the Terre di Siena

In the heart of Tuscany, surrounded by green hills, stands one of the most impressive mediaeval cities in Italy. It is famous for its mediaeval architectural and cultural beauties, and its historic centre was declared a UNESCO World Heritage Site in 1995.

Piazza del Campo alone could be said to make a visit worthwhile, even from the other side of the world. This unique piazza is the heart of the city, where tourists and inhabitants love to admire the surrounding monuments. The Piazza has an unusual shell shape and is the home of the Palio, the exciting horse race held every July and August. It is an important date for all Sienese, a moment when the city shows itself at its best. 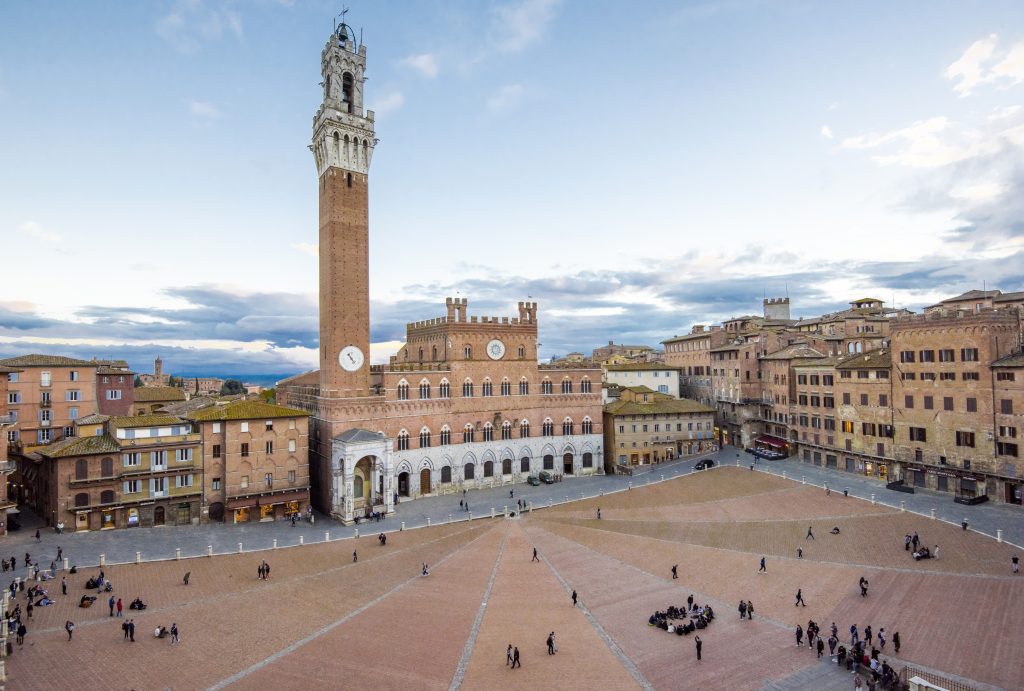 For the period of the races Siena is decked out in the colours of the 17 contrade (city districts) and enlivened by the roll of drums and historic parades that give tourists the feeling of living in a magical olden-days atmosphere. Piazza del Campo is also the site of the imposing Palazzo Pubblico (also called the Palazzo Comunale), built between about 1297 and 1310 by the Nine Governors of the Republic of Siena. As well as being the seat of the city administration, it also houses the Museo Civico. The Palazzo Pubblico is flanked by the famous Torre del Mangia, symbol of the city, photographed and admired by all the visitors, who can climb to the top to admire the Piazza and the whole city panorama from above.

The Palazzo Pubblico is also an obligatory stop for art-lovers. It houses the greatest masterpieces of Siena’s golden age of art, among them the celebrated fresco of the Allegory of Good and Bad Government by Ambrogio Lorenzetti, among the most important secular European artworks of the fourteenth century, and other famous pieces by Simone Martini, Duccio di Buoninsegna, Sodoma and Beccafumi. There are also the extraordinary works in the Pinacoteca Nazionale di Siena (National Art Gallery), the most important national museum in the city, which holds a major collection of works of the Sienese school. A unique and priceless heritage that can be appreciated all year round, it is a testament to the way this city keeps mediaeval civilisation alive. 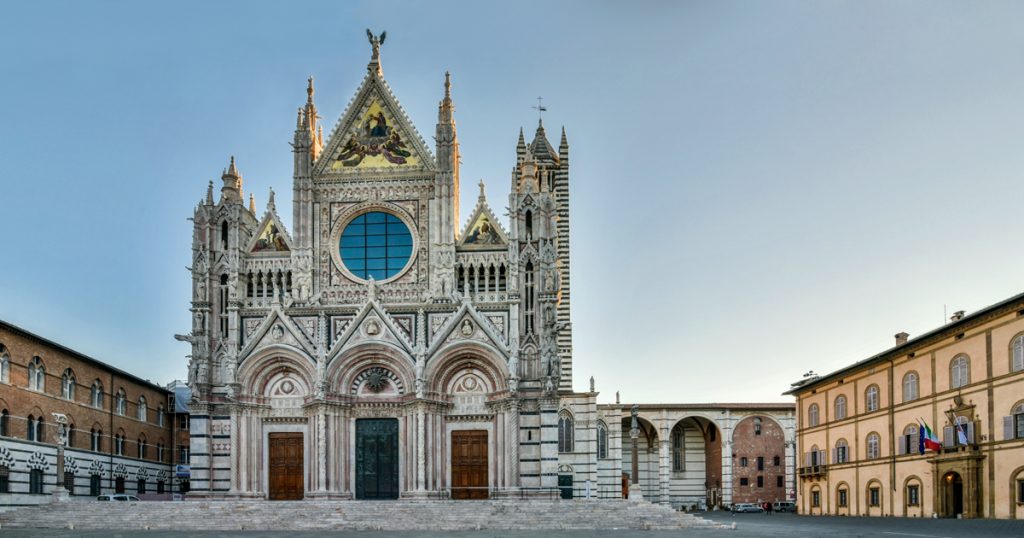 Leaving the Piazza del Campo behind you, climb up to the Duomo (Cathedral) and theMuseum Complex of Santa Maria Della Scala. Siena Cathedral is Italian Gothic-Romanesque, one of the most significant churches built in this style in Italy. The interior of the Duomo is a treasure-trove of works of art, starting with the pulpit by Nicola Pisano (1265-68), one of the most important works of thirteenth-century sculpture in Italy, while on the Piccolomini altar you can see four early works by Michelangelo: Saint Peter and Saint Paul, Saint Pius and Saint Augustine. Immediately beyond the altar is the Libreria Piccolomini, built in 1492 to hold the important library collected by Pope Pius II. The interior has frescos by Pinturicchio, and in the chapel on the left you can see Donatello’s famous St John the Baptist (1455).

We end with probably the most extraordinary work in Siena Cathedral: the marble mosaic Pavimento (floor) can be seen from August 18th to October 26th and currently, thanks to Opera Civita and the Metropolitan Opera, which have contributed for some time to the protection and development of the floor, you can see it in a new way, with the tiles of the marble carpet illuminated by unusual lighting effects. We can describe the Cathedral as the cradle of Italian painting and sculpture in the Middle Ages: every visitor and admirer of this period of history will love it.

Right next to the Duomo, Santa Maria della Scala is undoubtedly another must- see: one of the oldest and largest European hospitals. A wide range of routes and internal paths offer good views of the architecture, which is of great artistic merit.

A visit to Santa Maria will take you through the history of the city. Santa Maria was built as a hospital on the Via Francigena. It provided all sorts of services, from tending the sick to aiding the poor and caring for foundlings, but it was most important as a place of welcome for pilgrims, who brought with them much of the wealth that passed through the city in the Middle Ages. Even now, Siena is an important place for pilgrims, both religious and otherwise, who undertake this journey and come to the city to admire and treasure its extraordinary beauties. Santa Maria also holds national and international exhibitions, as well as training courses for children and families: a unique space that pleases young and old alike.

Siena is a city for everyone, a unique place of rare beauty with its little streets full of shops and narrow roads of white stone, where you can breathe in the true atmosphere of the city and be completely enchanted.