1.1 Art and history along Via Lauretana 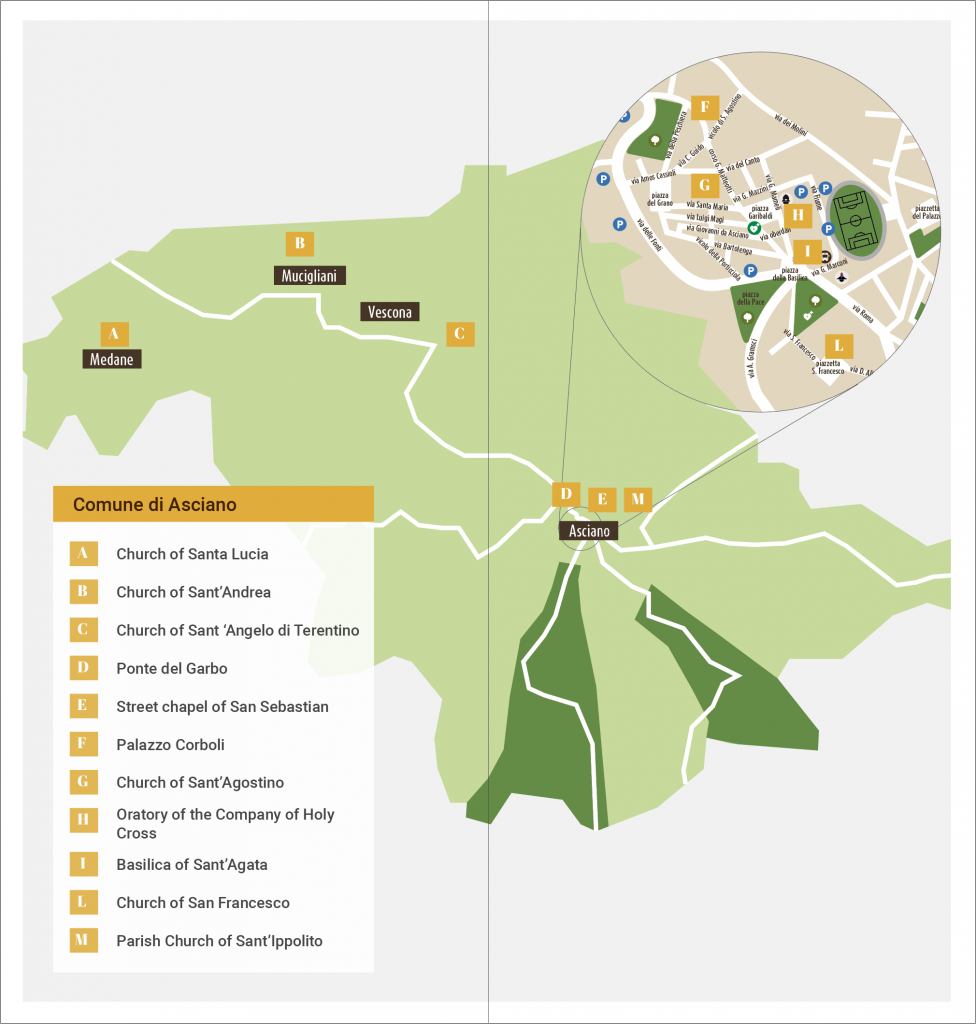 Travel in the footsteps of pilgrims and artists, guided by history and surrounded by the charm of unique landscapes. This stretch of Via Lauretana immerses itself in the Crete Senesi area and connects Arbia with the provincial capital, Asciano. A route to enjoy, recently traced and rediscovered thanks to historical and artistic studies conducted by volunteers of Arca (Asciano’s association for cultural research). A spiritual itinerary among the oldest and most evocative in the area. A trip to territories rich in art, archeology and devotional events, especially recommended for those who love the cultural aspect of the paths. It is a path that allows the pilgrim to get lost in suggestive landscapes made of rolling hills and flat expanses up to reach inhabited centers of significant historical and artistic interest.

From provincial road 438 the path heads towards the white road leading to Medane, home to Saint Lucia’s church, also known as Saint Cecilia’s, since 1081. Towards the end of the 13th century, the church, already called St Lucia, passed to the nuns of St Abbondio, as a document of 1285 shows. The church was probably rebuilt in the second half of the 16th century and included in the Villa di Medane, forming part of a symmetrical whole which remains to this day. In the 17th and 18th centuries, the religious building was dedicated to saints Jerome and Lucia. 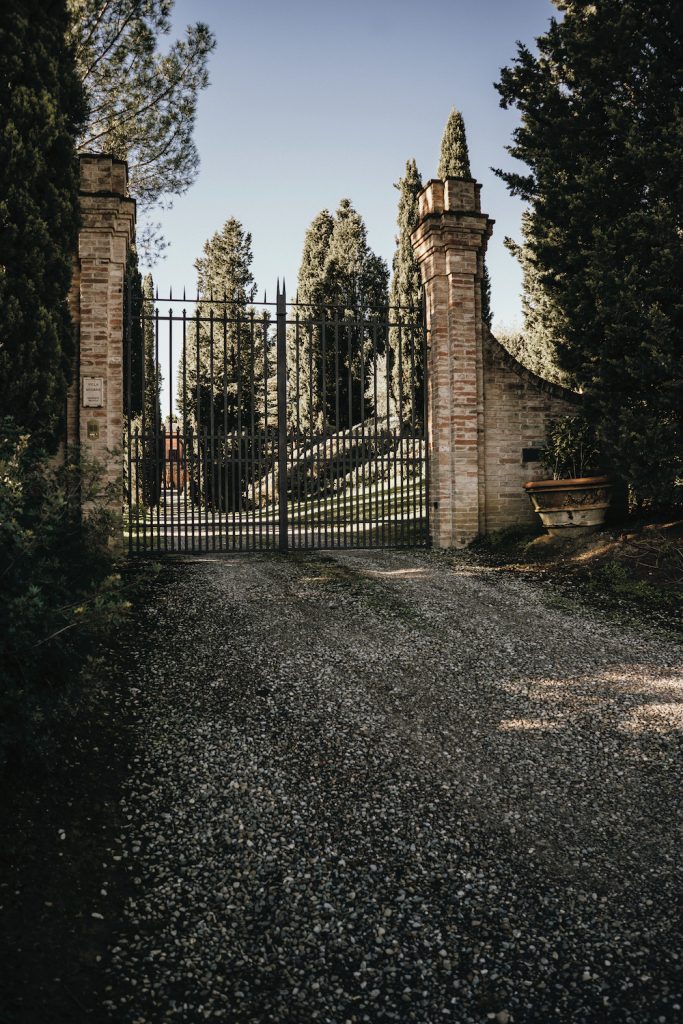 The route continues towards Leonina, bypassing the village, and on to the famous “biancane”. Enjoy the unique view from here, in the heart of one of the most photographed corners of Tuscany. Leaving behind the “Site Transitoire” sculpture by Jean Paul Philippe, we reach the village of Mucigliani, where we find the church of St Andrew, whose circular lunette of polychrome terracotta shows the Madonna and Child. In Mucigliani, on the facade of a house, there are wonderful majolica tiles in blue, green, yellow and brown depicting Our Lady of Loreto, a relic of ancient piety. 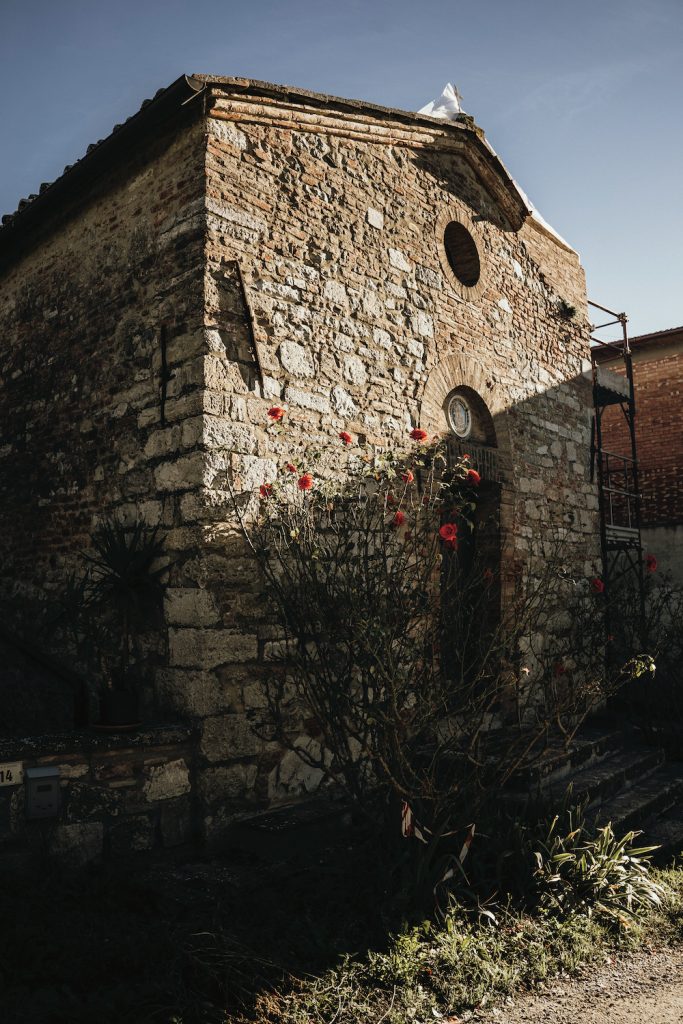 Step by step you reach Vescona and shortly after, turning from Fontanelle towards the road to Torre a Castello, you pass the ruined churches of Calceno and Crofeno and then the church of St Angelo di Terentino. There also used to be a mill, a pilgrim hospice and a bridge over the river Ombrone that allowed pilgrims on the Scialenga route to reach the left bank of the river and then Asciano, next to the medieval village of Camparboli (now a suburb). 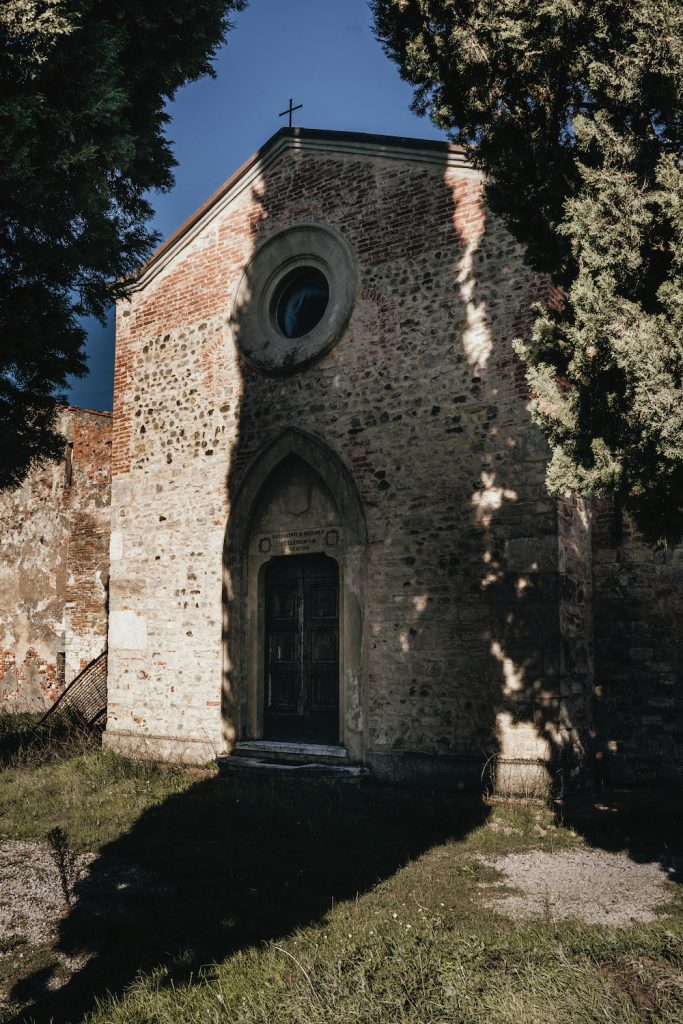 Near Asciano is the Ponte del Garbo (Bridge of Grace) originally called “di Rencine” after its locality. The name “Garbo” has always provoked curiosity and its origins are unclear. By tradition, but without any evidence, the term is usually associated with the battle of Monteaperti in 1260, when the people of Asciano, fighting alongside the Sienese, distinguished themselves sufficiently to be dubbed “gracious”. The adjective could also come from the name of a cloth prized in medieval times, and for this reason it was associated with important and powerful people (perhaps Portuguese from the “Algarve”); it seems that the word is ninth century. The existence in medieval times of the Umbronis bridge, near Asciano and on the main road to Siena, is only mentioned from the second half of the 13th century. The bridge is remembered down the centuries mainly for the damage and collapses it suffered, which were not repaired quickly. In 1944, it was blown up by the German army. Near the bridge is a shrine with the Medici coat of arms on top, which houses a polychrome ceramic Madonna and Child, damaged during the destruction in 1944; it was found in the river, almost intact and returned to its usual place after a devotional procession. 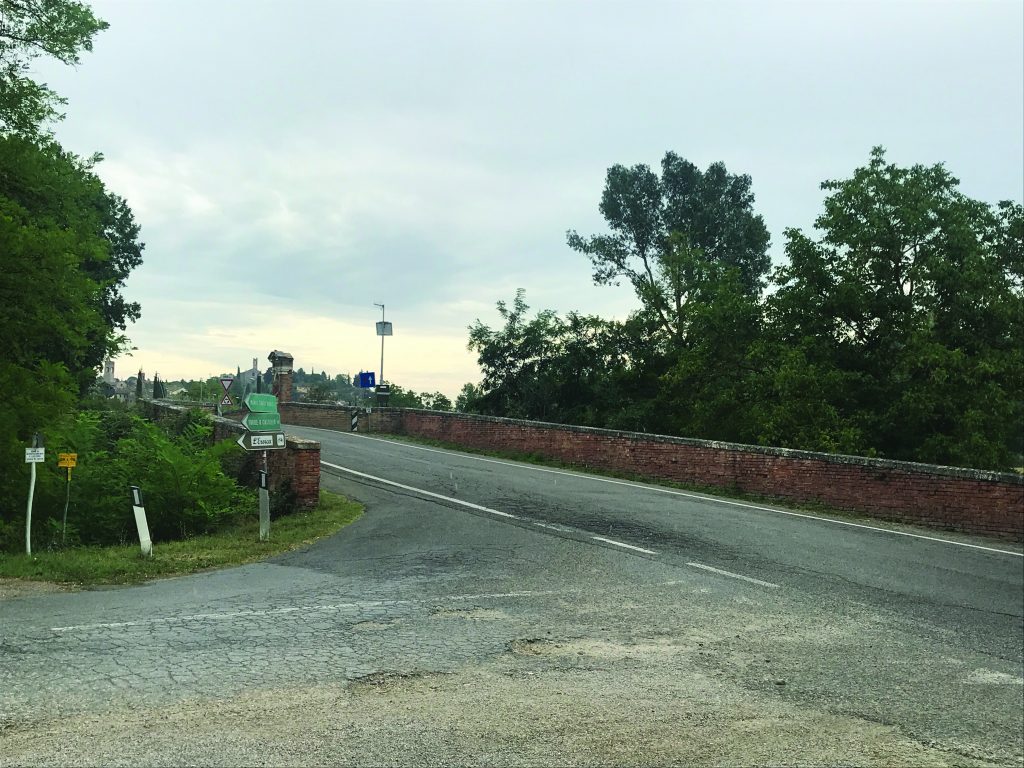 Once you have crossed the Ponte del Garbo, the roadside Chapel of St Sebastian sits on the left of the track on the stretch of the via Lauretana heading into Asciano, in the suburb of Camparboli, we find on the left side of the road the viaria chapel of San Sebastiano. Inside the chapel is a fresco of the Assumption of the Virgin with Saints Sebastian, Thomas and Agatha, patroness of Asciano; the painting, from the late 1400’s, is attributed to Benvenuto di Giovanni and his son Girolamo di Benvenuto. A short distance away is the church of the Madonna of the Garden. The structure, built thanks pious donations, was looked after directly by the community, which elected three workers or “santesi” and a treasurer, and services were performed by Augustinian monks. Later, in the 17th and 18th centuries, a hermit monk lived there. 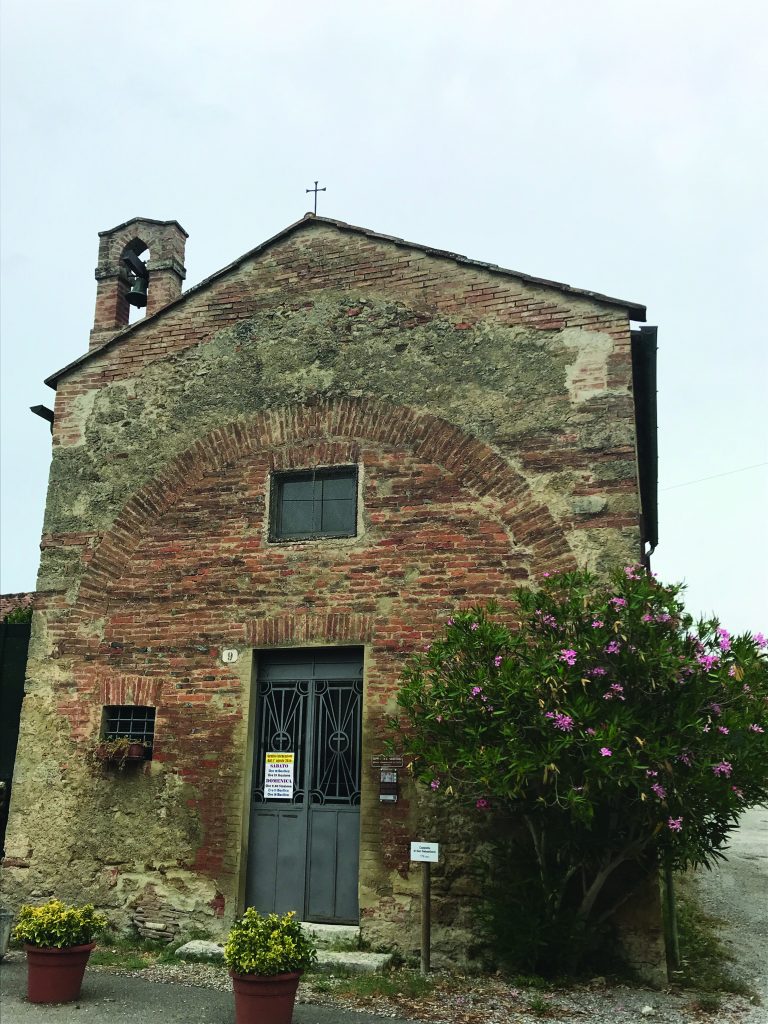 When you reach the historic centre of Asciano, entering through either the Porta Senese or the Porta dei Bianchi, the museum of Palazzo Corboli, a little further on, is a must-see. Here the religious art section has works by artists such as Giovanni Pisano, Segna di Bonaventura, Ambrogio Lorenzetti, Francesco di Valdambrino, fifteenth century panels by the ‘Maestro dell’Osservanza’, by Pietro di Giovanni d’Ambrogio, Matteo di Giovanni, Giovanni di Paolo. These works by Sienese artists celebrate, in their region and at a century’s distance, the tradition of small town painting by fourteenth century artists that follows a line of commissions by the growing agricultural aristocracy. The line continues with important examples from the following centuries, including the Crucifixion by Bernardino Mei, one of the greatest exponents of the Sienese baroque. The archaeology section occupies several rooms on the second and third floors, with archaeological finds documenting the Etruscan settlements of the Alta Valle dell’Ombrone, in particular those discovered during the excavation of the necropolises of the Poggione and of Poggio Pinci. 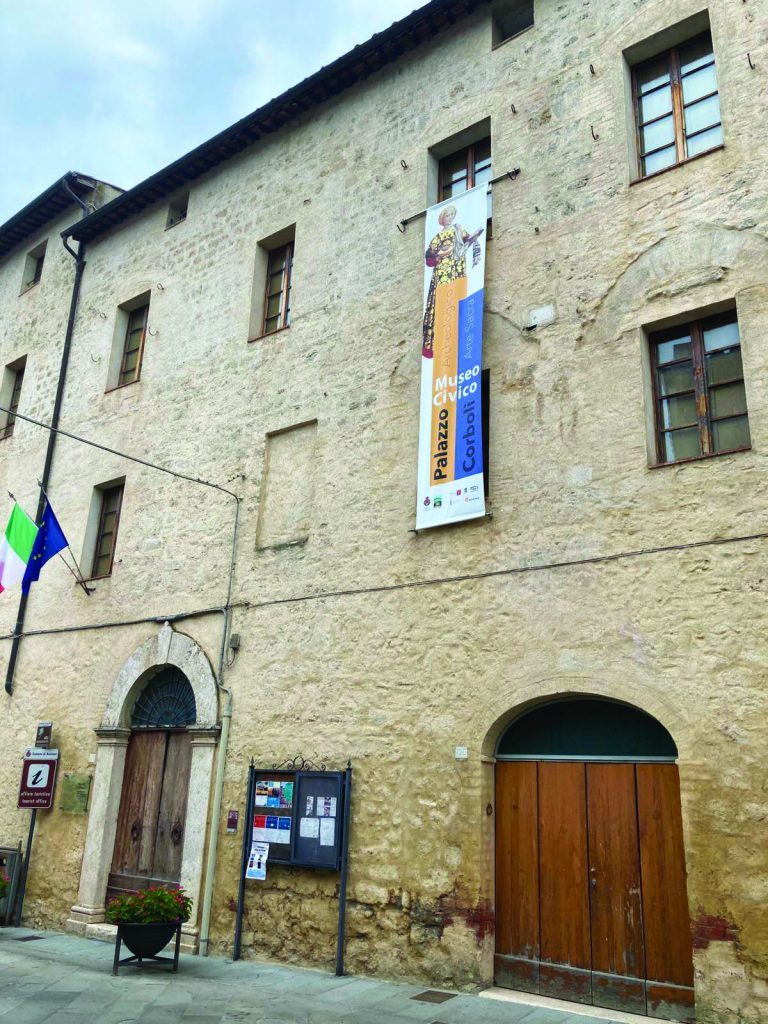 Once out of the museum, continue along Corso Matteotti and look out for the church of St Augustine on the left. Inside are frescoes showing St Christopher (patron of travellers) and St Sebastian. There is also a Loreto theme: on the middle altar on the left is a painting representing St Nicholas of Tolentino, the Augustinian monk who first saw the miracle of the Holy Family’s House settling at Loreto. Along Asciano’s main street are fresco wall panels of which the remains are still clearly visible. It is curious to note that the two beautiful frescos are intentionally oriented towards people coming from Siena. The first, the Madonna Enthroned with the Child, is at the entrance to Via Santa Maria. The position is extremely significant: directly on the pilgrim route, this picture is very visible and acts as a guide on the route. The figures beside the Madonna are lost; they represented the protector of travellers, St Christopher, and St John the Baptist, name saint of the church opposite (now called San Bernardino) and of the neighbouring pilgrim hospice. The Madonna’s face is slightly inclined towards the right, while that of the Child turns directly to the traveller in the street on the left and looks down towards the pilgrim. The second fresco represents the Madonna Enthroned with the Child together St Michael the Archangel and St Agatha and is visible crossing Corso Matteotti from the Porta dei Bianchi and arriving in the small square called “the Pianella” by the Ascianesi, which opens unobtrusively on the right and is decorated with a small fountain. 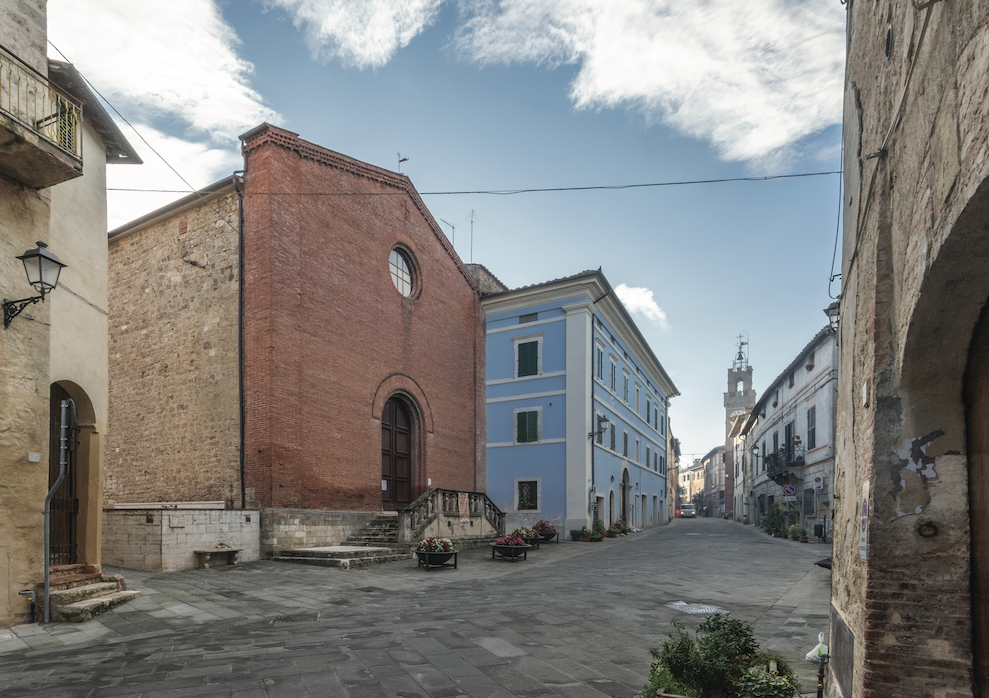 Oratory of the Company of Holy Cross

Shortly after, to the side of the Basilica of St Agatha, is the Oratory of the Compagnia di Santa Croce (Companions of the Holy Cross). Diametrically opposite the entrance door is the entrance to the sacristy, where numerous sacred artworks are preserved, among them a small wooden statue of Our Lady of Loreto that, according to tradition, comes from Canapaia near Torre a Castello. It seems that in the postwar period, this statue was taken to Asciano for reasons of safety by Monsignor Angelo Sadotti, priest of the Basilica of St Agatha. The statue is just over one metre high. The figure of the Virgin Mary is represented standing on a wooden pedestal. The dominant colours are gold and clear white, which contrast with the dark complexions of the Madonna and of the Child in her arms, with their brown eyes and wavy raven black hair. The bodies of the two figures appear hardly shaped under the bell-shaped robe typical of Our Lady of Loreto. 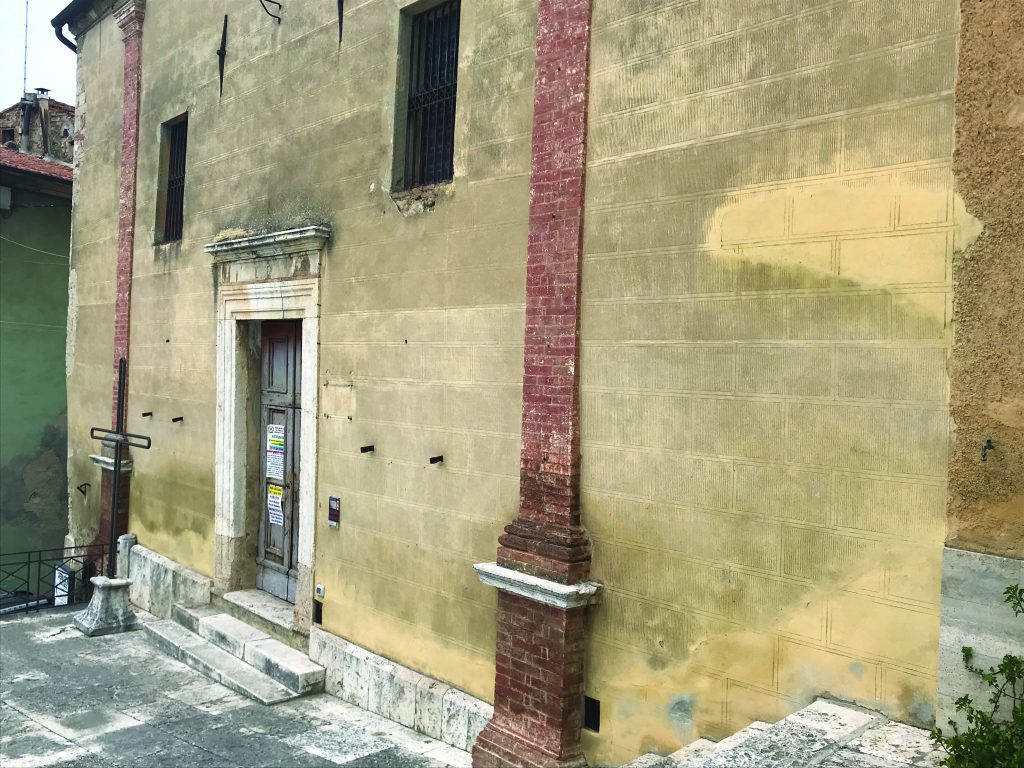 Don’t miss out on a visit to the Basilica of St Agatha. Apart from devotion to the reputedly miraculous wooden crucifix, a devotion the Ascianesi have marked since the mid-18th century with a feast and procession in September dedicated to the Most Holy Cross, the church had a Loreto theme, with a painting representing Our Lady of Loreto (now lost), mentioned in the inventory of Brogi in the mid-nineteenth century. 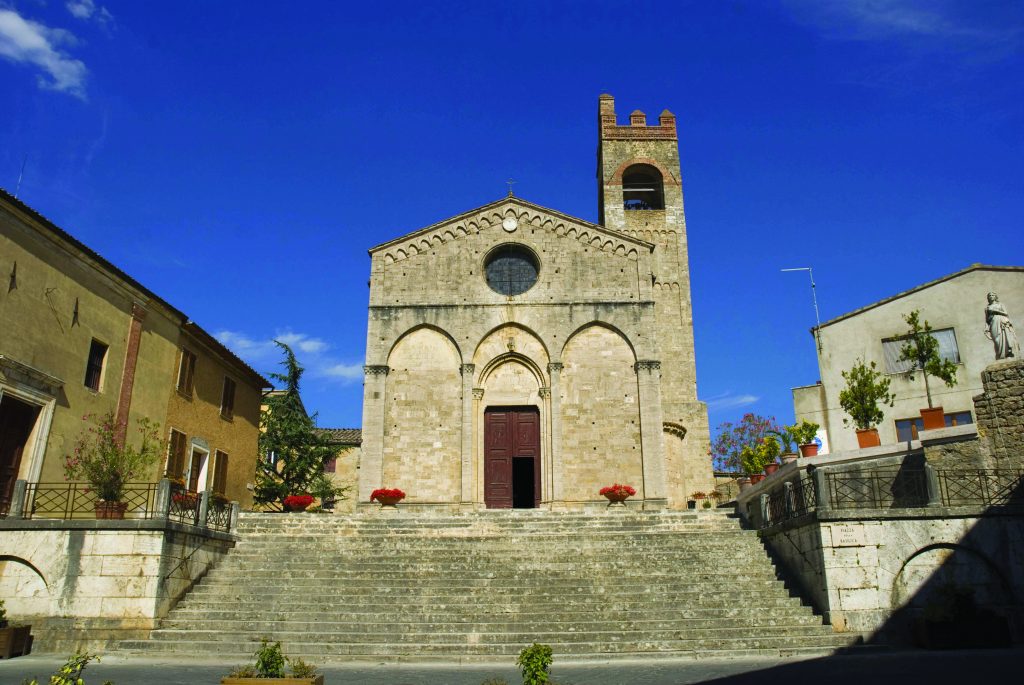 At the intersection between Via Roma and Via Dante Alighieri, the street that leads to St Francis’s Church, is a plaque of the Madonna of the Vertighe. It represents Our Lady of Loreto enthroned with the Child in her arms. The Virgin Mary is always very recognizable thanks to the particular cloak in which she is always represented; in the case of this plaque it is shown in an original way to great effect. The base colour used by the artist for the robe is yellow, a reference to gold. 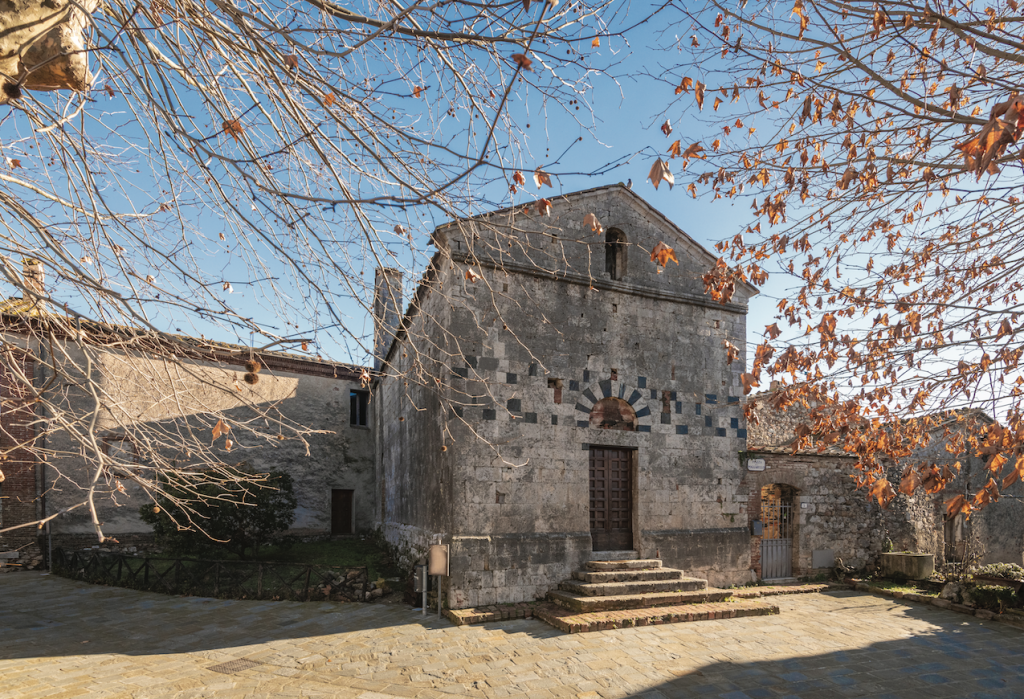 We are now at the final stage of the route: the parish church of St Hippolytus. The church is now private; it has a nave and a single altar with a fresco above it, placed in a lunette-shaped niche high up. In the early 19th century the fresco was attributed to a minor Sienese artist (Giacomo Pacchiarotti) and shows a Holy Conversation composed of the Virgin Mary Enthroned with the Child and Saints Peter, Paul, Hippolytus and Cassian. Either side of the central image, the painting continues with false niches in which are found, on the left the figures of St Dominic and St Augustine, and on the right St Anthony of Padua. At the extreme right of the fresco a final image was found during restoration that, at some undefined time, was changed to a fake curtain. The faint traces remaining today do not allow clear identification, but the most convincing hypothesis is that it is a penitent St Jerome. This beautiful fresco, clearly the work of many hands, is almost certainly by Umbrian artists. According to the art historian Divo Savelli, it is from the Umbrian school and could be the Madonna and Child attributed to Pinturicchio, head of Raphael’s studio. What strikes us at first sight is undoubtedly the adolescent and refined face of the young St Hippolytus, with cloak and sword, the only one turned towards the observer; experience suggests that usually, somewhere among the faces, a self-portrait of the painter is hidden. Through the comparison of physical traits between this face and selfportraits of some famous painters, an amazing resemblance to Raphael is revealed, above all compared with another self-portrait (which can be completely superimposed on this one) held in the Ashmolean Museum in Oxford. On the painted surface of the collar of the young saint, the famous signature RAPH. V. (in Latin RAPHAEL URBINAS) can be seen; although faded, faint and damaged it is clear. If so, everything would be explained since, as seen in the stories of the pilgrims of the time, one of the various undertaking of Loreto pilgrims was to devote themselves to God on the eve of their departure on a joyful but also difficult and dangerous penitential journey. It is possible that this sign shows that Raphael, although he was from the Marche, was intimately devoted to Our Lady of Loreto. 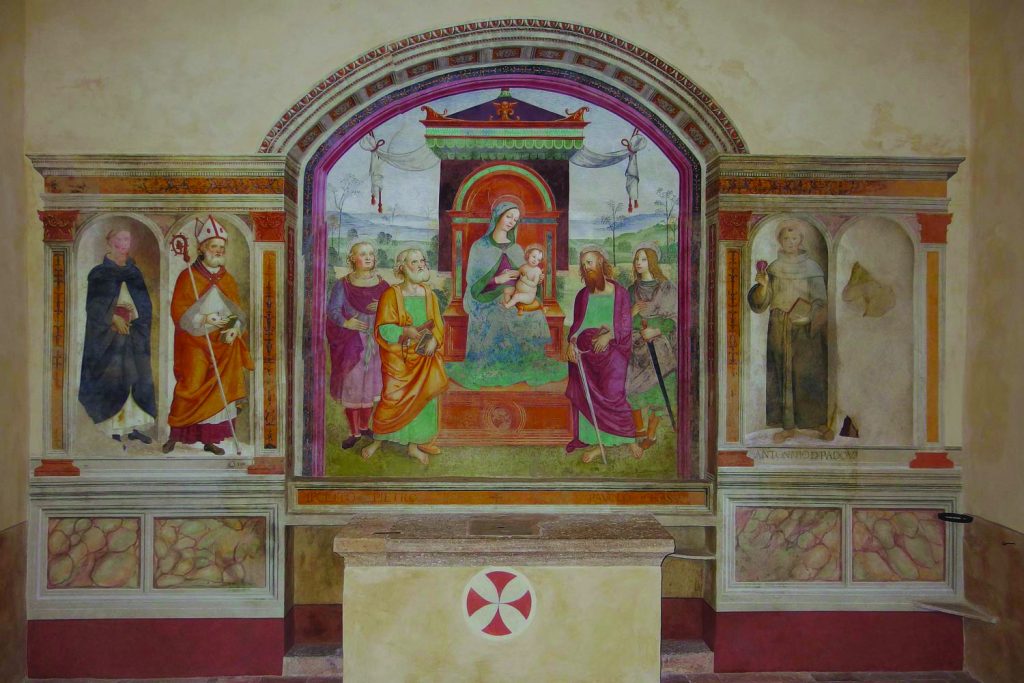