1.6 Monteroni d’Arbia: a land of granges and hamlets 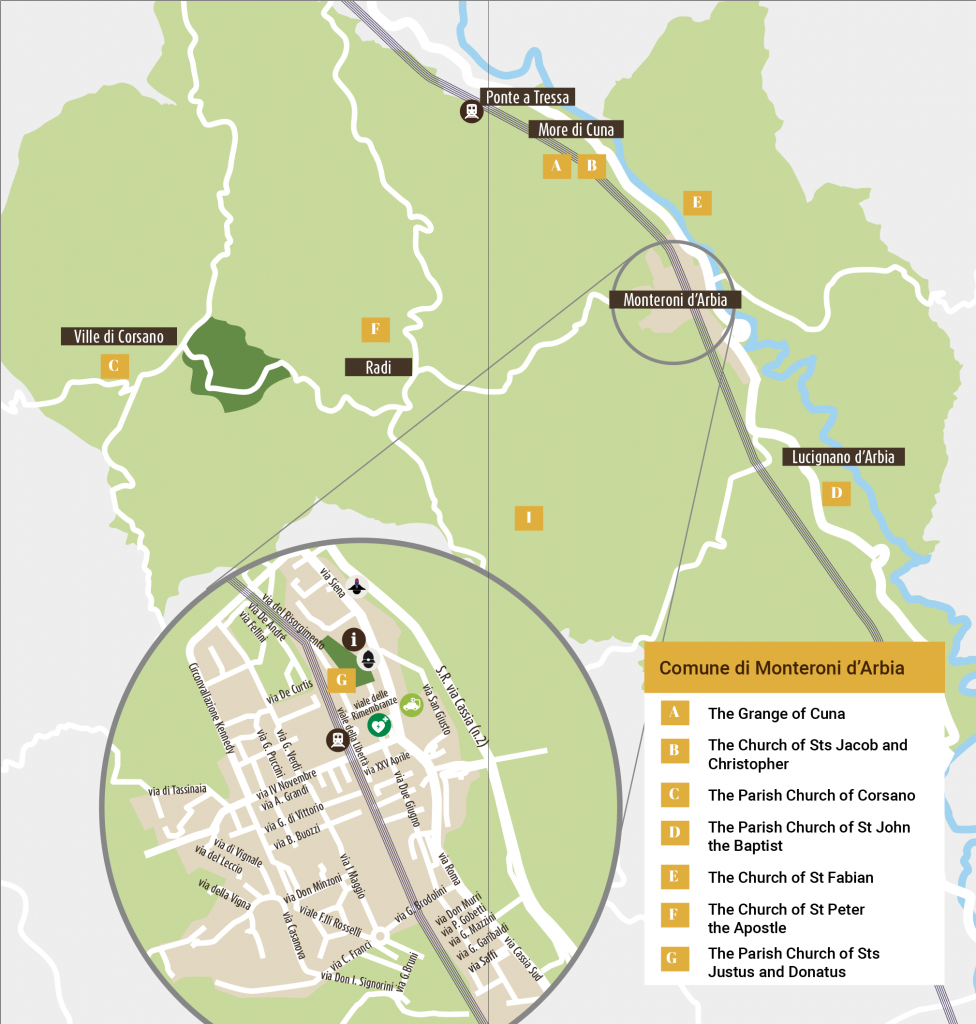 Roughly 15 km from Siena, where the area known as Crete Senesi descends to the river Arbia, we find Monteroni d’Arbia, which is crisscrossed by the Via Francigena road. This historic village developed during the early 13th century thanks to the work of the Hospital of Santa Maria della Scala in Siena. It was during the following century, however, that the small town grew around the structure of the Fortified Mill. This water mill is thought to date back to the first century B.C., which would make it one of the first examples of a structure designed for the industrial transformation of raw materials in history. The structure was fortified between 1322 and 1324, again at the behest of the Sienese Hospital of Santa Maria della Scala, which was strongly interested in its proximity to Via Francigena, which was traversed by thousands of wayfarers. Today, Monteroni is also known for the many examples of medieval architecture that can be found within its borders. As well as the mill, visitors can visit the Grange, a farmhouse that was fortified by the hospital and the commune of Siena in the 13th century. But it is Monteroni’s churches that dominate its territory. The fourteenth century church dedicated to Sts Jacob and Christopher is located just outside its centre. Outside the town, visitors can find the parish of Corsano, dating back to the 11th century, which includes the Church of St John the Baptist and the two towergates of Lucignano, built during the 14th century.

The Grange of Cuna

The Grange of Cuna is a fortified farmhouse that was built in 1224 by the commune of Siena and the Hospital of Santa Maria della Scala on top of the pre-existing structure of the hospital, which had been in place since the 12th century. Very large in size and still perfectly preserved, the complex consists of a small enclosed hamlet and a farmhouse fortress overlooking a triangular space that can be accessed via the entrance tower. 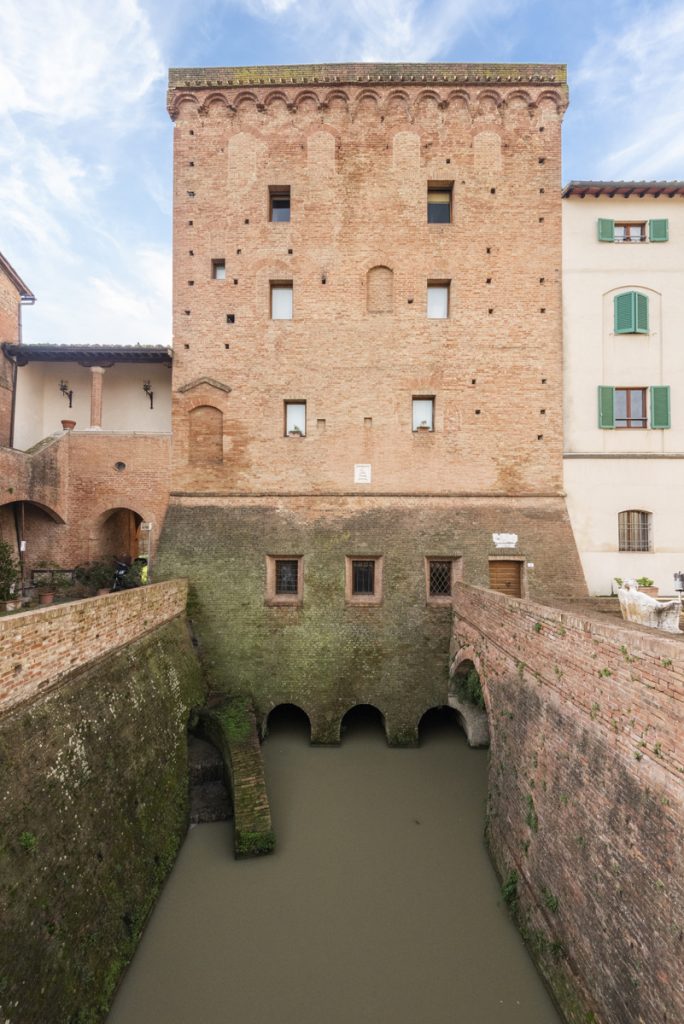 The powerful structure of the Grange of Cuna, which can easily be identified thanks to the characteristic colour of the red bricks with which it was entirely built, is the best preserved example of a fortified medieval farmhouse, as well as one of the most unique and interesting architectural complexes that can be found in the Sienese countryside and the whole of Tuscany. A hospital dedicated to welcoming and assisting pilgrims and merchants passing along Via Francigena as it passed through Arbia developed here in the 12th century. According to a document of Pope Eugenio III, this building was the property of the Abbey of Torri. The entire countryside became the property of Siena as early as the 13th century, but the farmhouse situated on the hill of Poggiarella di Cuna e Castelluccio was donated by the Hospital of Santa Maria della Scala, one of the most powerful institutions of the time. The rector of the Hospital, Ristoro Menghi di Giusto, immediately decided to expand the existing building. From that point on, the grange developed into a small, independent village enclosed by walls, featuring gates and towers, houses, and the farmhouse fortress at its centre.

The rector’s successor, probably Giovanni de’ Tolomei, began the construction of a new granary and the renovation of the church dedicated to Sts James and Christopher in 1314. In the 14th century, due to significant political and military instability, the hospital was forced to fortify its granary in order to safeguard its grain and wheat reserves. These fortified rural granaries were known as granges. The complex of Cuna is a large, square block with scarp walls and two corner towers equipped with defensive structures on the southern front. The main entrance leads into an L-shaped courtyard from which the internal rooms and warehouses are accessed via a ramp [which can be ascended by beasts of burden to reach the highest floors], the first section of which is covered by beautiful cross vaults. This was a true farmhouse fortress, surrounded by a first ring of walls dating back to the 14th century, with embrasures, access galleries and a patrol walkway that can still be seen. A second ring encompasses the farm and the village built around it. The main gate of this ring remains intact today. Cuna was sacked in 1554, during the last Sienese War, by Austro-Hispanic troops. During the second half of the 17th century, a roof was added to the farm and the towers that covered the preexisting battlements. The manor house, located between the two rings, was built during the 17th century. Cuna gave asylum to both kings and popes: to Urban VI in 1386, Marin V in 1420, and Paul III in 1451. In 1640, Carlo di Guisa of the Lorraine family died here.

The Church of Sts Jacob and Christopher

Outside the fortified centre of Cuna we find the small church of Sts Jacob and Christopher. The dedication to St. James seems to confirm the presence of a hospital annexed to the church. In 1314, the church was completed rebuilt. The building, constructed entirely of terracotta, has a single nave that is crowned externally by a cornice resting on corbels. The hall receives light from the window on its façade and two additional windows of Gothic proportions, which feature round arches that evoke a Romanesque style. The interior preserves the remains of a series of fourteenth century frescos, including a Madonna with Child and Saints, a Presentation at the Temple and an Adoration of the Magi. 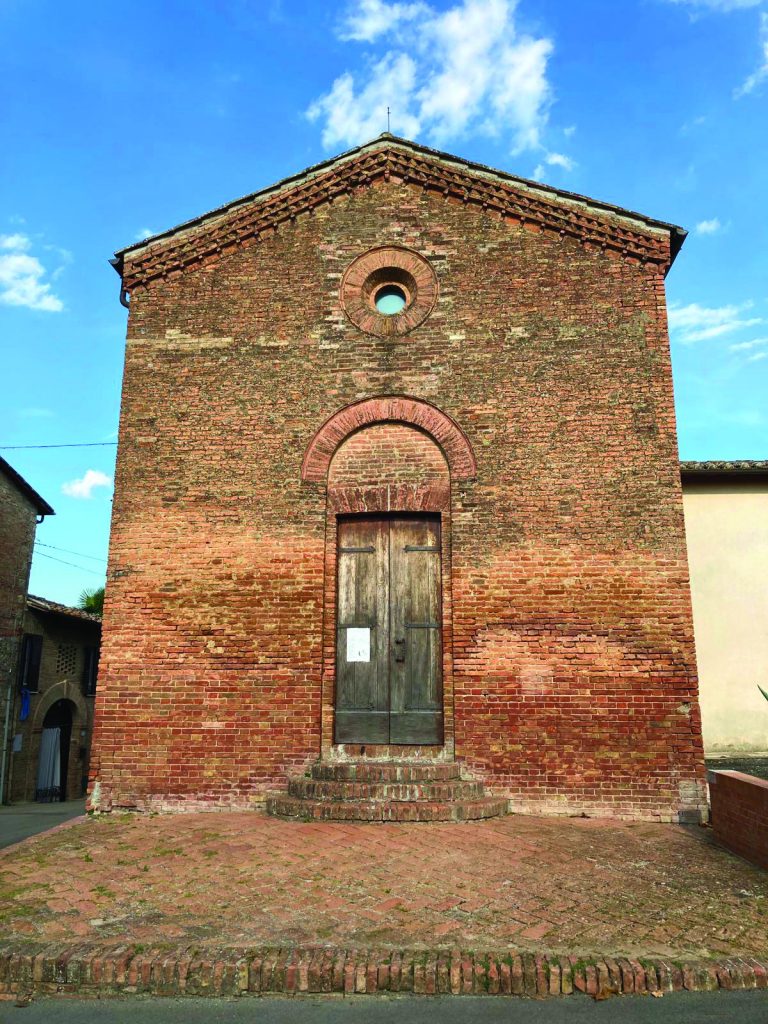 The Parish Church of Corsano

A little further away is the Parish Church of Corsano, founded in the 11th century and dedicated to St John the Baptist. Typically Romanesque in style, it features a double banked façade with two blind arches. The church is known to have existed since 1031. The doublebanked façade, featuring arches and half columns in the upper part and large blind arches in the lower part, is inspired by Pisan models interpreted in the style of Lombardy. 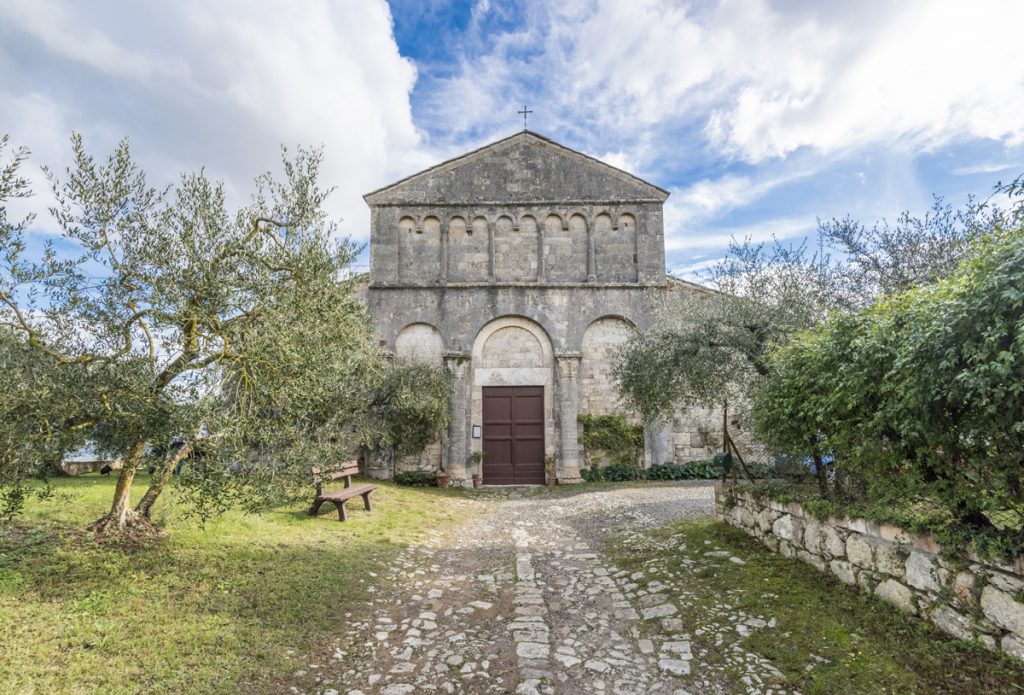 Inside, the church features three naves, and Romanesque elements are evident in the half pillars of the counterfacade and the composite pillars of the first aisle. Two paintings by Alessandro Casolini can be seen, depicting The Annunciation and The Adoration of the Shepherds, as well as a polychrome terracotta sculpture of St Agatha, attributed to Carlo di Andrea Galletti.

The Parish Church of St John the Baptist

Returning along Via Cassia, a little beyond Monteroni, the small village of Lucignano d’Arbia demonstrates its fortified origins in its two fourteenth century tower gates and its sturdy medieval tower, which was transformed into the belltower of this Romanesque parish church. The water mill, which first appeared in the first century B.C., can be considered the first industrial structure in history: partly because it transforms natural resources into motive power, and partly because raw materials have to be transferred from the place of production to the place of transformation, both of which are characteristics of modern industrial production. 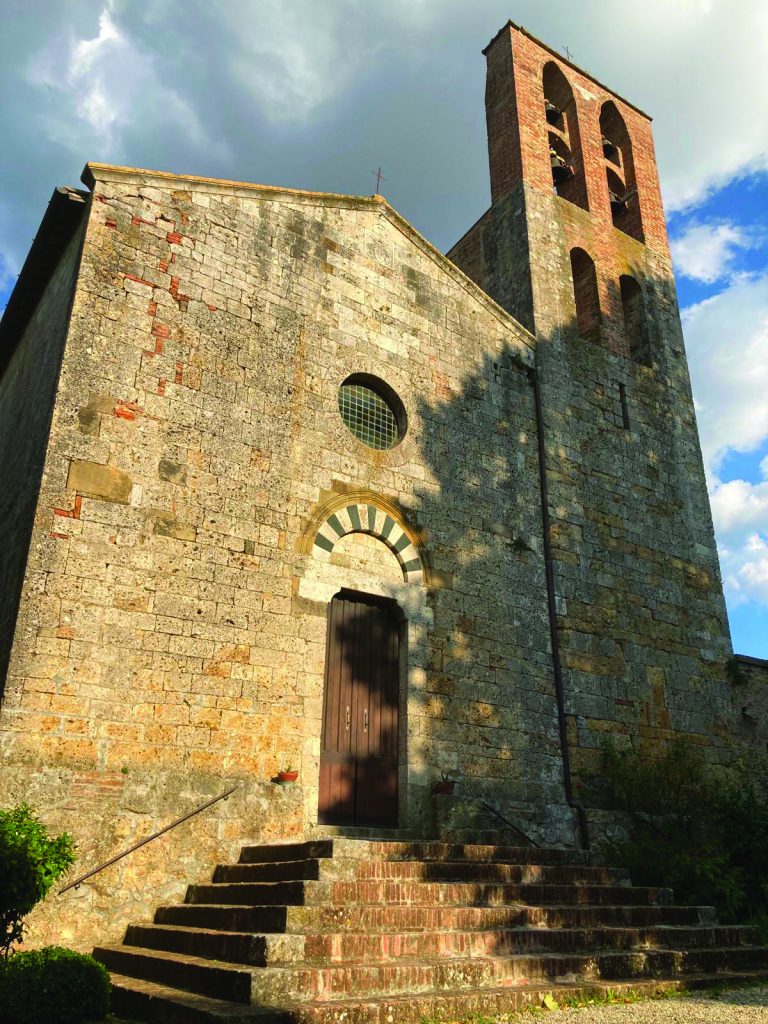 The Parish Church of St John the Baptist can also be found here. Recorded on this site since the beginning of the 10th century, restoration work in 1933 restored its original Romanesque features, with a single nave system ending in by a semicircular apse. The three large transverse arches of the nave are set on half pillars and support the wooden roof of the nave. To the right rests the tower, whose impressive dimensions betray a more ancient form of workmanship than both the church itself and the light Gothic style belltower. The façade is enlivened by the two colours of the gate’s arch, which is surmounted by a small round window. Inside, we can find a painting entitled Crucifixion and Saints by Bartolomeo Neroni, who was known as ‘il Riccio’ (c. 1554-1555).

The Church of St Fabian

Churches are the pride and joy of Monteroni d’Arbia, which boasts many examples scattered along the entire stretch of Via Francigena. The Church of St Fabian, for example, can be found in the village of the same name. The presence of the church is documented in the year 867. At the start of the 14th century it was a suffragan of the parish of Lucignano, and – in view of its low income – was united with the parish of Monteroni during the 16th century. With a single nave and semicircular apse, the church’s most interesting element is located in the historic external brick wall face: featuring a bell gable, it preserves a number of decorative elements such as the architrave of the gate, which bears the coat of arms of the Forteguerri family, dated 1657. 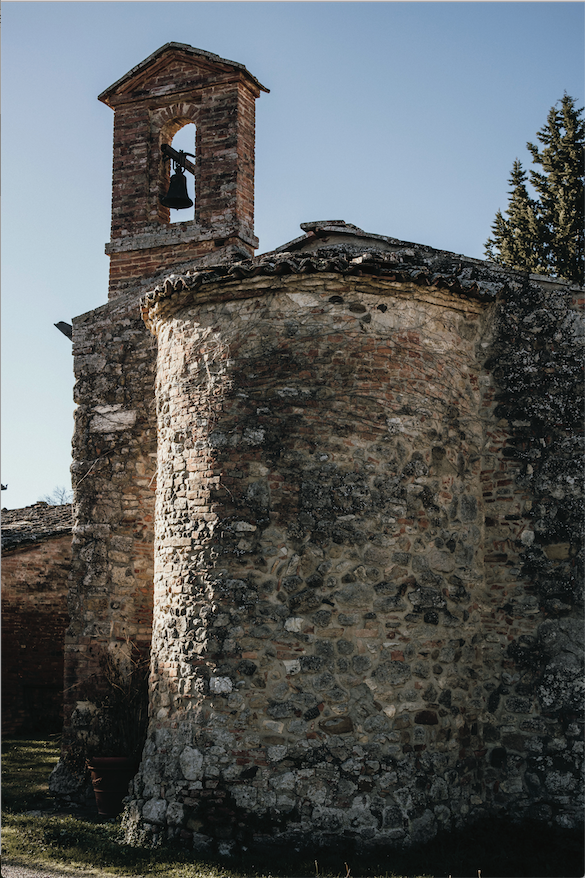 In Radi, visitors can find the Church of St Peter the Apostle. The earliest mention of the church dates back to the 13th-14th century. Today, it consists of a small, single nave building with a semicircular apse and a brick façade rebuilt in a neo-Romanesque style during the 19th century. The belltower, however, is original. Inside, its oldest element is the eighteenth century side altar in stucco. The church was originally home to a fourteenth century panel depicting The Mystical Marriage of St Catherine of Alexandria and Sts James and Anthony the Abbot, attributed to Maestro di St Ivo and now housed in the Museum of Buonconvento, as well as a Madonna of the Star painted by Amos Cassioli in 1868. The latter painting was commissioned by Marquis Alessandro Bichi Ruspoli, the owner of the farmhouse in Radi, and is now held in the Cassioli Museum in Asciano. While the church’s interior, featuring a single hall, was renovated with the construction of three baroque altars, the exterior has maintained its medieval appearance, with a cornice consisting of three notched bands of terracotta enclosing bricks positioned at the edge. The bell gable, with two single light lancet windows, is probably a reproduction in a neo-Gothic style.

The Parish Church of Sts Justus and Donatus

Finally, we reach the site of the ancient Church of St Donatus, which dates back to 1244 and was entirely destroyed over the centuries. It has recently been replaced by a new building, the Parish Church of Sts Justus and Donatus, which houses works from the 15th and 17th centuries. The ancient origins of the old church – which has been replaced by a construction from the 1970s – are revealed in the Romanesque gabled façade. Now a conference room, no evidence of its former use can be found inside. Several works of art have been rehomed in the new church, such as The Madonna and Child, painted by Dionisio Burbarini, a Sienese painter active between the end of the 17th century and the start of the 18th century. This painting sits inside an elegant neo-Gothic frame in the shape of a small temple. The Martyrdom of St Catherine of Alexandria, a work dating back to the same period, has also been rehomed here, along with a Crucifix of high artistic quality, linked to the elegant Sienese tradition of sculpture in the 15th century. 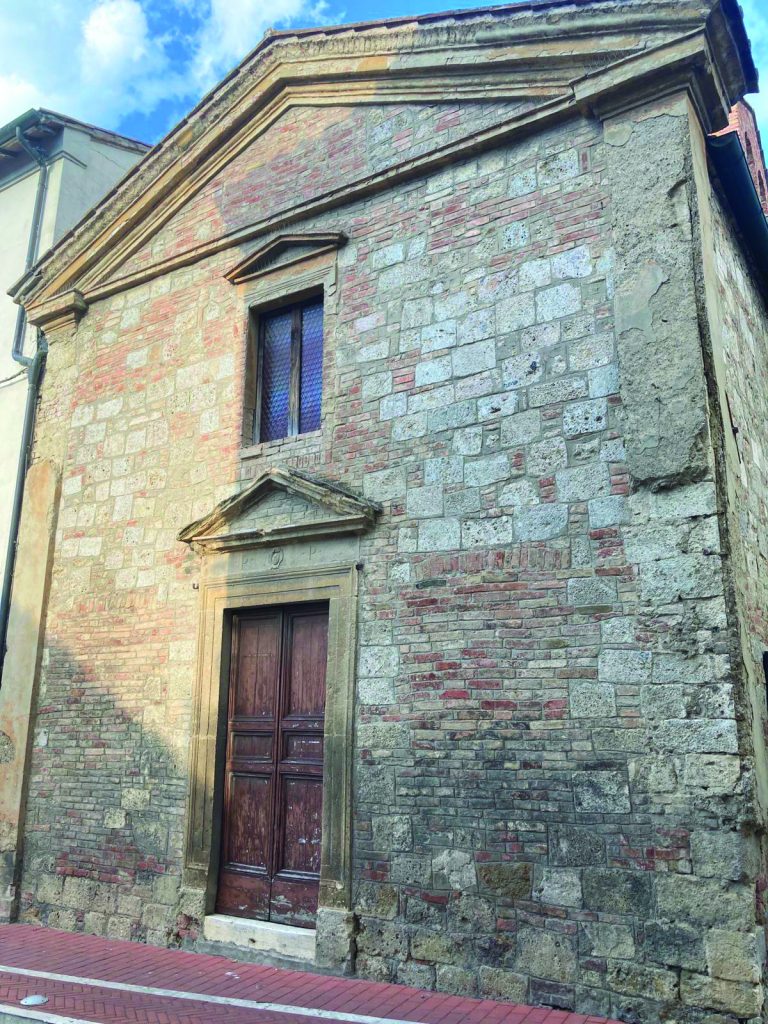