The Middle Ages and Renaissance left an artistic heritage that is the basis for art the world over, and can also be interpreted as “photographs” of a living, working Siena. Ambrogio Lorenzetti’s famous Allegory of Good Government, for example, shows numerous examples of trades such as the shoemaker, the tailor and the grocer, with an impressive depth of detail and realism. The same thing happens with the Pilgrim-house frescos in Santa Maria della Scala, where the impressive work of the hospital “machine” is clearly depicted by Domenico di Bartolo. The Museo delle Biccherne (museum of painted wooden panels) in the Archivio di Stato also shows details and particulars of work that tell tales of the past. 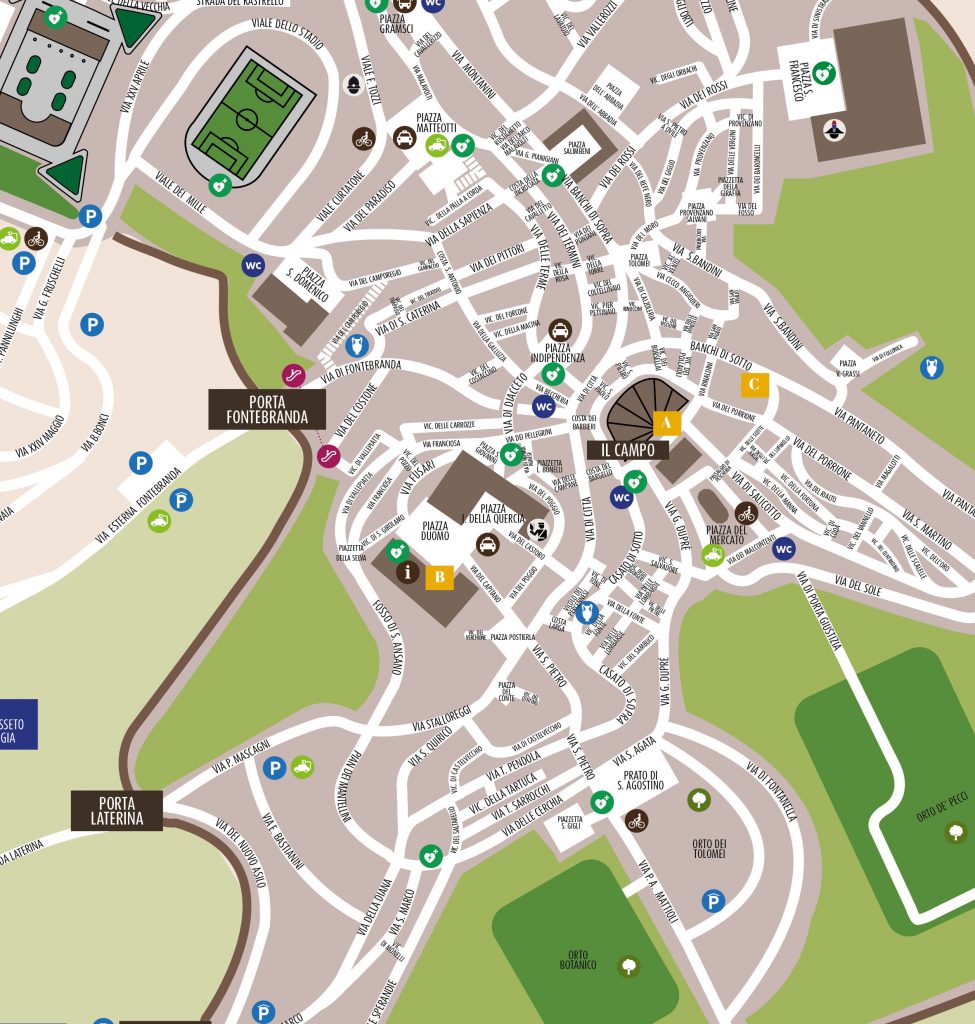 The Governo dei Nove (Government of the Nine, or Council of Nine) commissioned Ambrogio Lorenzetti to create the frescos in the Sala della Pace in 1337, with the intention of presenting the city with a political manifesto through images of their work. The cycle, very complex both figuratively and in its content, covers three walls of the hall with the Allegory of Good Government and its effects in the city and countryside and the Allegory of Bad Government and its effects.

The wall that tells us most about life in Siena in the fourteenth century is the Effects of Good Government, which shows representations of work, recreation and daily life in a mediaeval city.

On the left, under the arcade of the building are some men who are probably playing dice in a tavern, then further up the street we see a tailor, sitting sewing on his bench, and a money-changer’s shop, a very important business in Siena.

Under the central arches of the building is the shoemaker’s shop, where he makes and sells leather shoes and soled socks. To his right, next to the studium, is the delicatessen, with cured meats and cheeses on display and ready for sale.

Higher up, near the city gate, wool-workers are carding fleece and making cloth.

Near the walls, the businesses are humbler and connected to the country: a shepherd and a carrier with their animals, and also two grocers bringing poultry, eggs, and other foods they have bought in the country, into the city to sell.

Even on the roofs work thrives: builders and manual labourers, including women, who work “by quota” on a stone tower, possibly the Torre del Mangia, which was under construction when this fresco was painted. 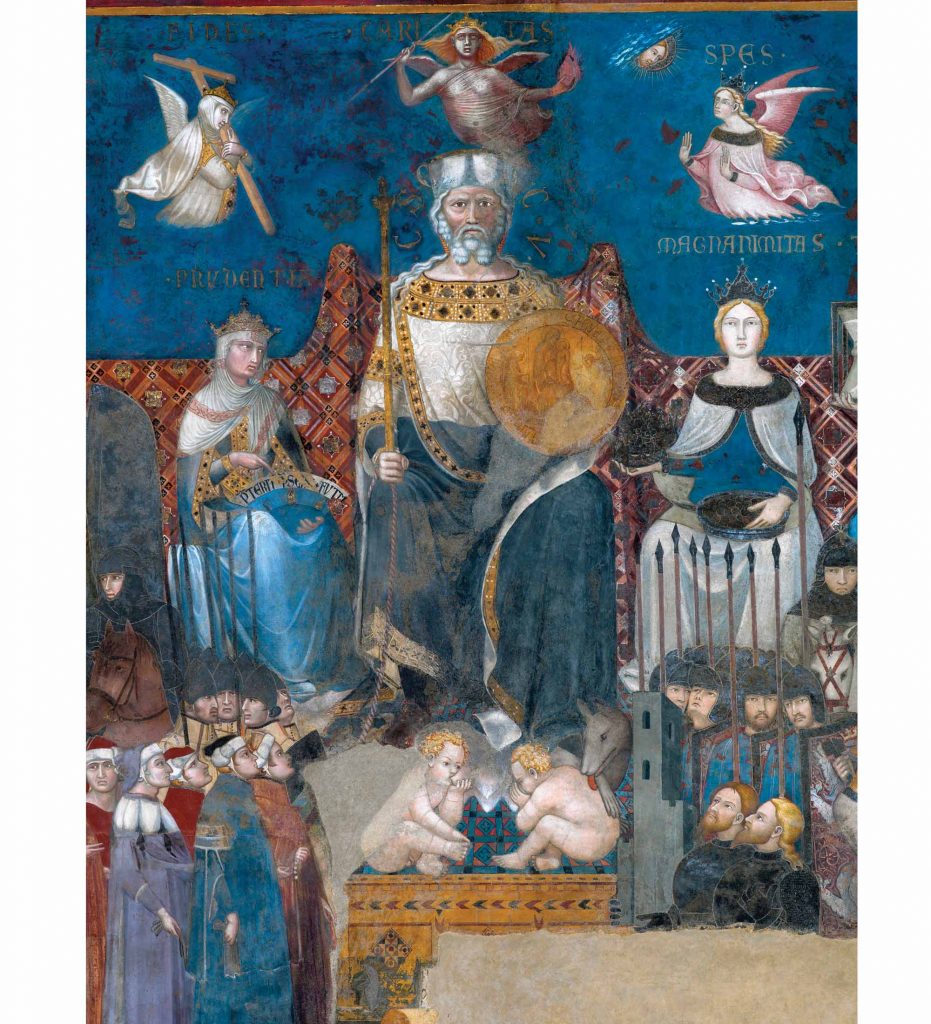 The Santa Maria della Scala hospital, dating from 1090, was a place of welcome for travellers on the Via Francigena for centuries, as well as helping the needy of the city. Between 1440 and 1444 the rector of the hospital, Giovanni Buzzichelli, commissioned various Sienese painters to create frescos of the men’s Pilgrim-house, a place where pilgrims were welcomed as well as a representation of the institution.

On the left wall of the Pilgrim-house is the story of the hospital, while on its right wall the Sienese painter Domenico di Bartolo “photographed” life inside the hospital.

The first scene, nearest the window, shows in minute detail the cure of the sick. The people wearing black garments and pink overgarments are the hospital servants, who clean wounds or carry coffins, while a fat friar on the right hears the confession of a dying man.

The following scenes, the distribution of alms and the care of foundlings, show in great detail the hospital’s activities of caring for the poor and for abandoned children, who were looked after, educated and prepared for marriage, if they were girls, or work, if they were boys. The frescos show, with an abundance of realistic detail, the complexity of the hospital’s organisation, where hundreds of people worked in a variety of jobs, from treating the sick to providing food, right down to the wet-nurses and teachers. It was a rich and complex structure that looked after the most disadvantaged and the sick for centuries. 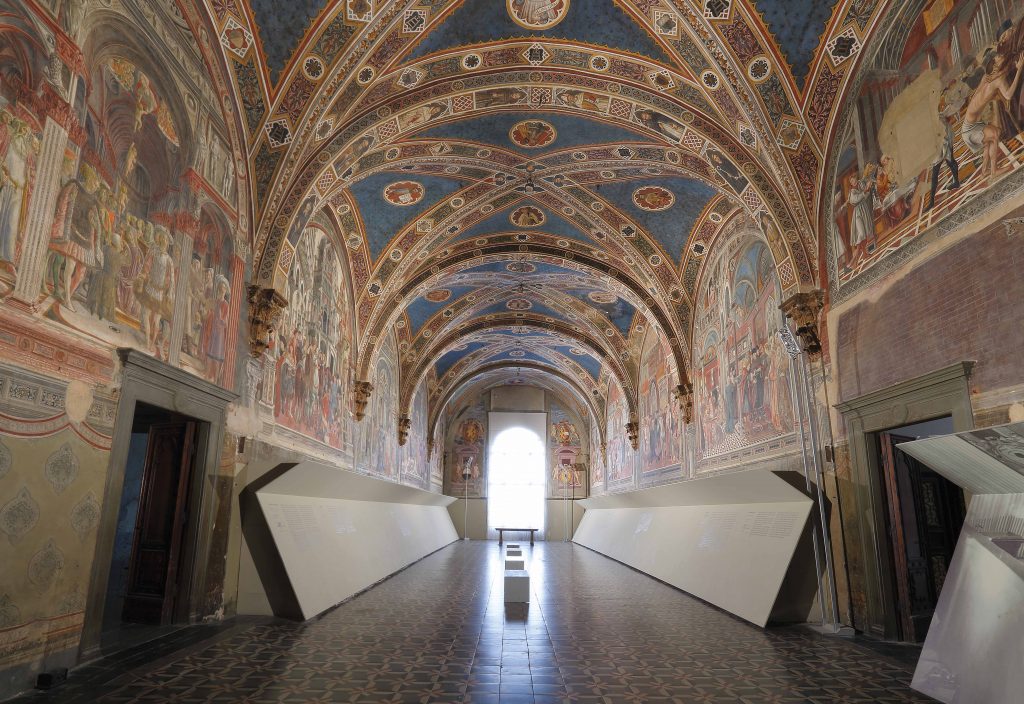 In the Archivio di Stato di Siena is a museum that is a jewel of its kind: the Museo delle Biccherne. The office of the Biccherna in Siena was the financial organ of the Sienese state and, at the end of the session’s work in 1257, it decided to have the lid of the accounts register for the period painted for the first time.

Born out of a practical need for the proper archiving of the documents, painting the covers was a strong tradition for four centuries and also extended to other offices like that of the Gabella (excise office). For a long time, the Biccherna office was run by the monks of the Abbey of San Galgano, as a guarantee of ability and honesty; later the treasurers and supervisors of the Biccherna were members of important Sienese families.

Many of the panels show officials of the Biccherna at work: the first panel in the museum, for example, shows Don Ugo, a Cistercian monk at San Galgano and also treasurer for the second session of 1258. On panels 2, 4, 6, 7 and 9 other monks appear with sacks of coins or account registers, doing their job. Later, on panels 15, 17 and 20-22, the depiction of the office of the Biccherna becomes more realistic, showing benches, strongboxes, instruments for measuring the coins and a waiting room. The world of Sienese finance is minutely described and reminds us also of the trade of the many money-changers who had their shops, in other words their benches (banchi), along the main streets of the city, which became Via Banchi di Sopra and Via Banchi di Sotto. 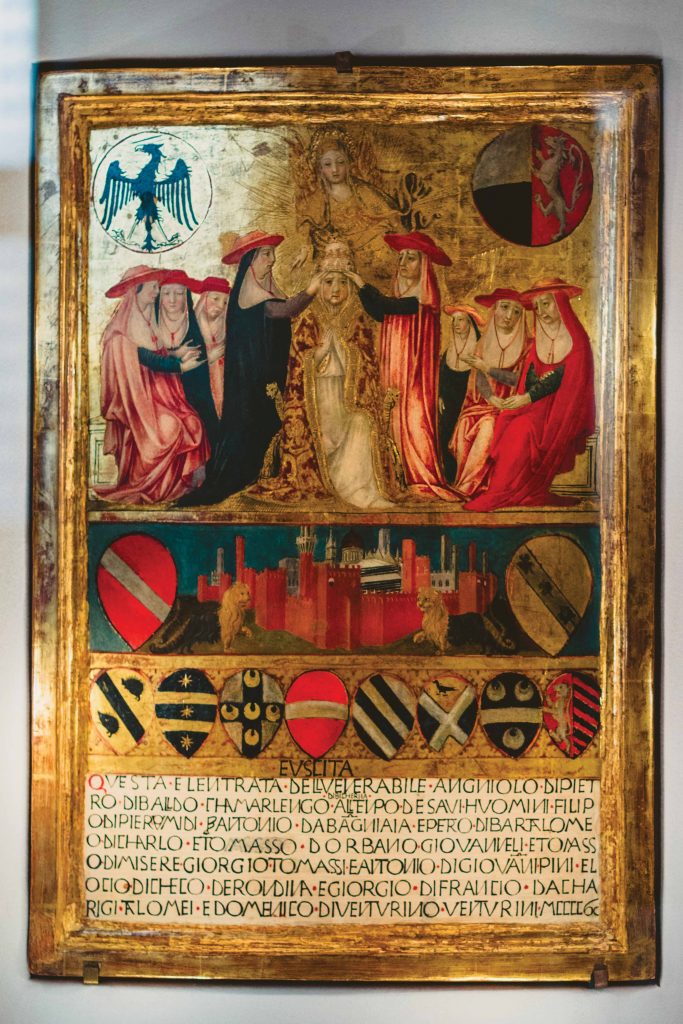