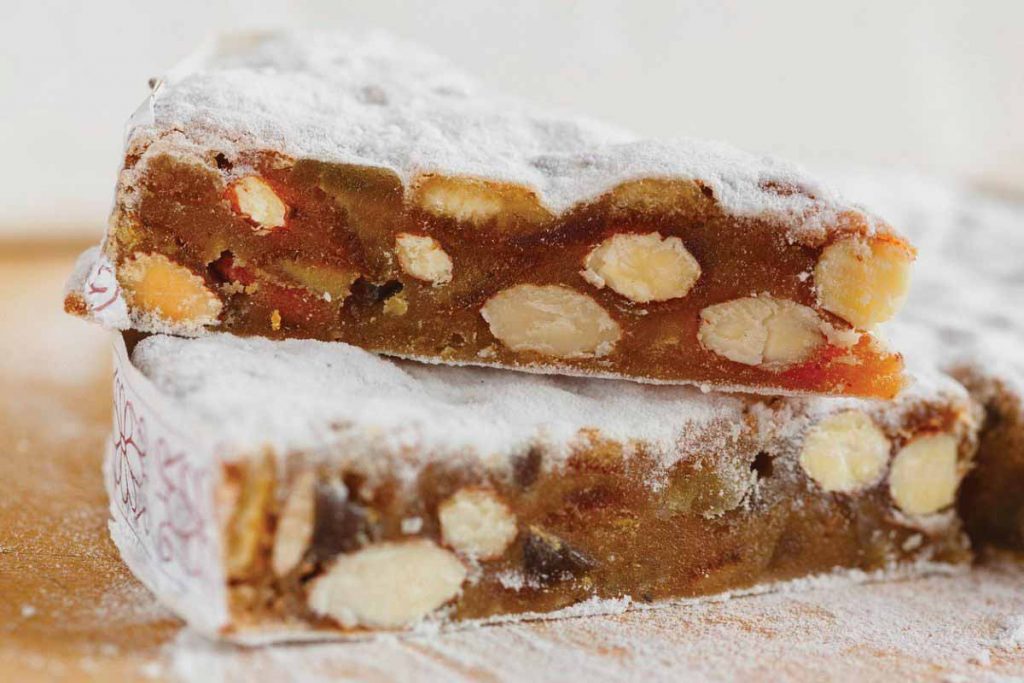 (spiced biscuits, made respectively with fruit and nuts, honey and almonds, and candied orange peel and anise) are typical Sienese confections, mainly eaten around Christmas-time. Dating back to the Middle Ages and still made following ancient recipes, they achieved world fame thanks to enterprising Sienese businesses that knew how to connect these delicacies and the beauties of their hometown. As they used large quantities of spices, they have always been produced in spice shops, which were also pharmacies and had the monopoly on their sales.

One of the oldest products is panpepato (“peppered bread”) which, according to the oldest sources, has been made since the thirteenth century. In the Nineteenth century, Ugo Foscolo was among the first to use the word panforte (“strong bread”)for a sweet developed from panpepato, enriched with dried fruits and less spicy than its predecessor.

In 1887, a new type of panforte, more delicate and dusted with icing sugar, was named in honour of Queen Margherita, who was visiting Siena with her husband, Umberto I. 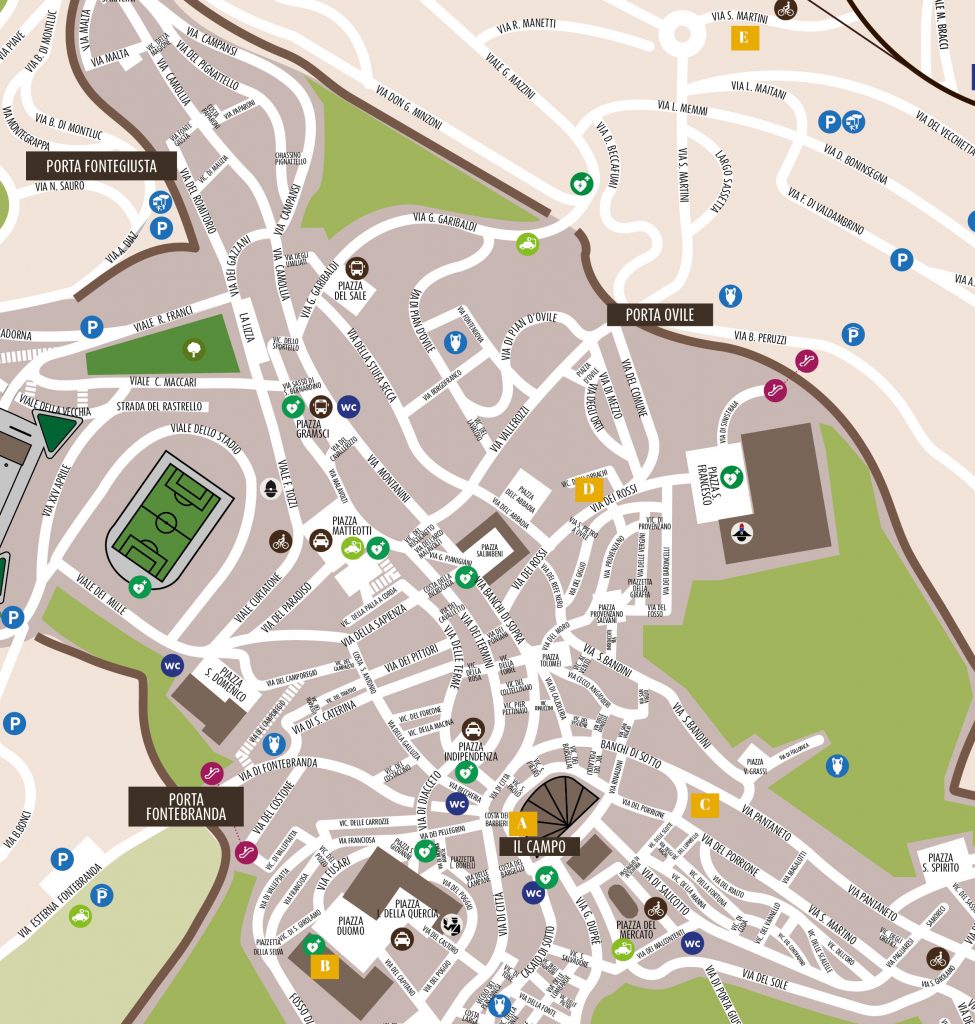 In 1829, Giovanni Parenti founded his panforte factory in the pharmacy in Piazza del Campo, later developed by his son, Galgano, who began to have the glazes on the popular confections decorated with Sienese views and monuments.

From the end of the nineteenth century, the principal painters and designers of the local Accademia di Belle Arti (Academy of Fine Arts) created the decorations on the panforte, now painted on the boxes in which they are sold. The custom became so widespread and popular that the expression “panforte style” came to be used for paintings and images in neo-mediaeval style, not just those on panforte boxes.

The furnishings of the period have been preserved inside the pharmacy, and on the glass of the medicine shelves you can still see the portraits of Giovanni and Galgano Parenti, as well as the slogan “Fabbrica di Panforte” (panforte factory). 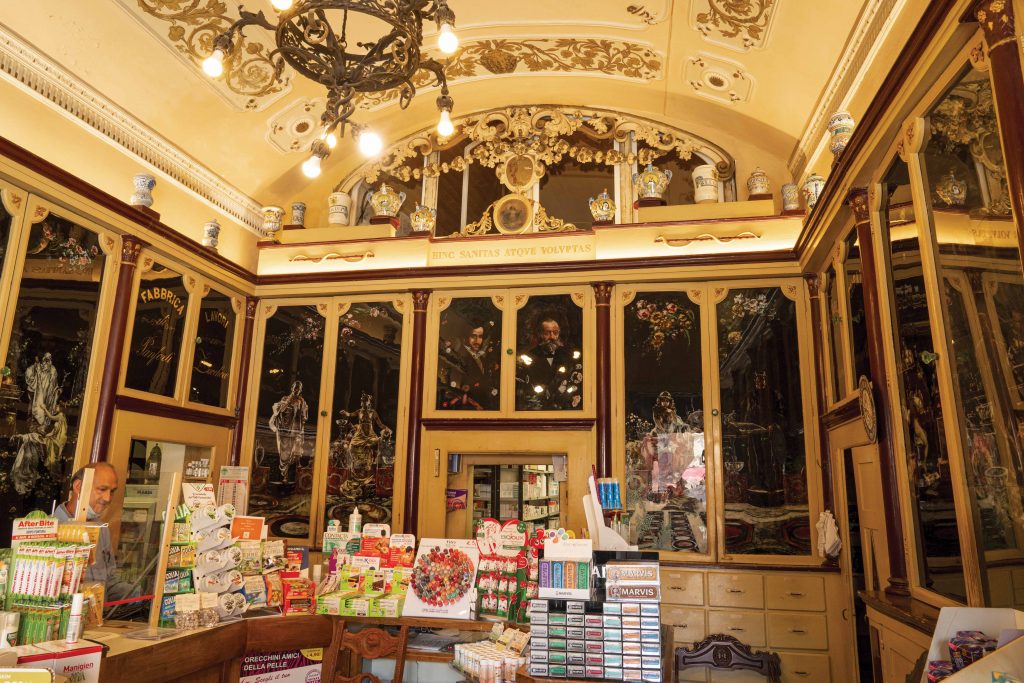 Taking part in the historic parade of the 1928 Palio was a carroccio (originally an army wagon that carried the banner of a free city state) built by Fedrigo Icilio Joni, a celebrated painter of old masters – or forger, as some of his contemporaries called him.

The wagon, a reminder of mediaeval battles, appears twice a year in Siena’s Piazza del Campo for the historic parade before the Palio races of 2nd July and 16th August. Joni’s wagon is an example of the “panforte style” that can be seen on many early twentieth-century Palio flags. It shows representations of the seventeen contrade (city districts), painted as young women, dressed in renaissance clothes and holding images of the coats of arms of the contrade.

Logge del Papa
Natale Pepi, one of the first large-scale producers of panforte, had his spice-shop and café near the Logge del Papa.

The Palazzo del Rettorato is in the same area. During the nineteenth century many people studied here under Pietro Tommi, a modern chemist, among them Giovanni Pompeo Gifoni. In 1832 he was the person who had to tell the spicers and confectioners that not all pigments can be considered “edible”. A few years earlier, a Sienese spicer had unwittingly decorated the surface of panforte with a green glaze made from arsenic, which had given some fifteen unwary people from Livorno serious stomach-ache. 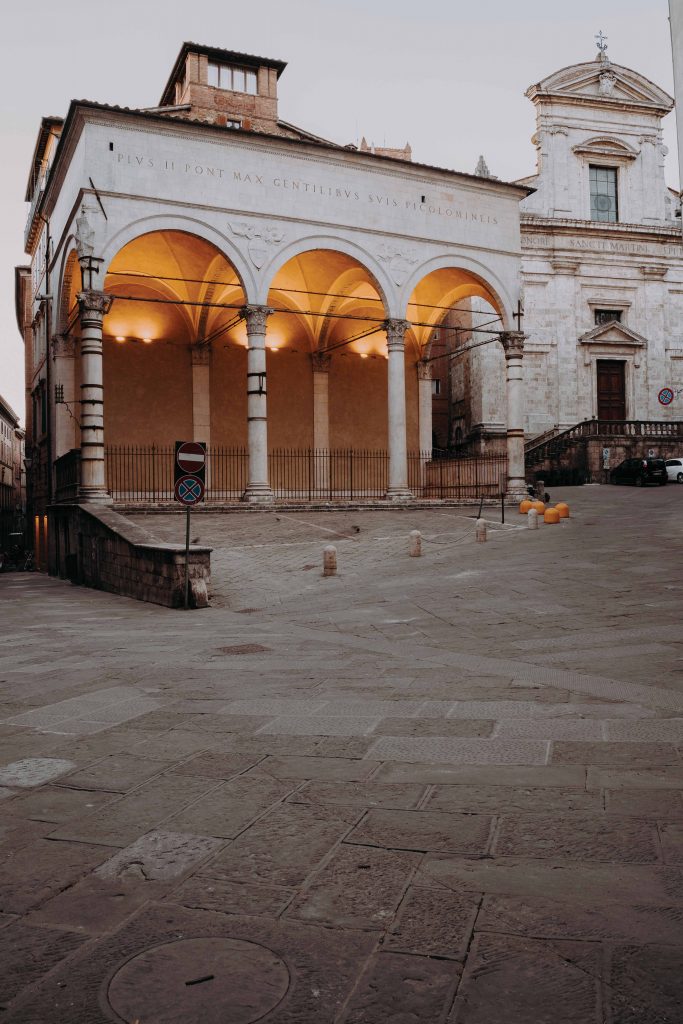 The convento dell’Osservanza (monastery of the Observance), founded by St Bernardino of Siena in the fifteenth century, sits on the colle della Capriola (Somersault hill), a little way from the city. Natale Pepi came here in 1802 as a spicer, also becoming responsible for the spice-shop of the Ospedale Santa Maria della Scala. After 1810, when Napoleon suppressed the religious orders, he went into business with Lodovico Dei and opened a spice-shop in Via Banchi di Sotto, from which he began exporting panpepato outside Tuscany. 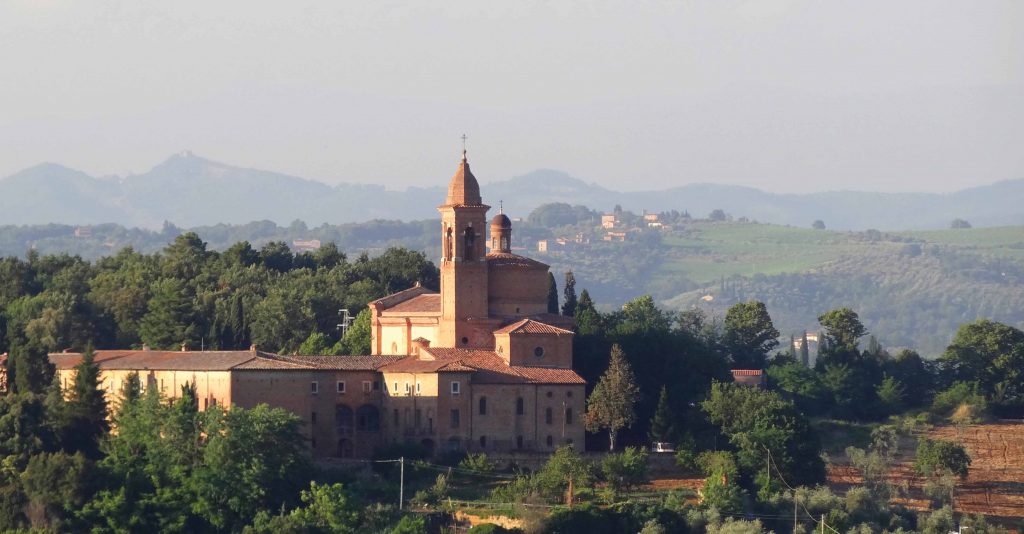 On this road you can still see the building that housed the historic Parenti panforte business. The building, in neo-renaissance style, has decoration reminiscent of the glazed terracotta of Della Robbia, and some more original terracotta reliefs by Ezio Trapassi, an early twentieth-century Sienese sculptor. These show little cherubs cutting a huge wheel of panforte. 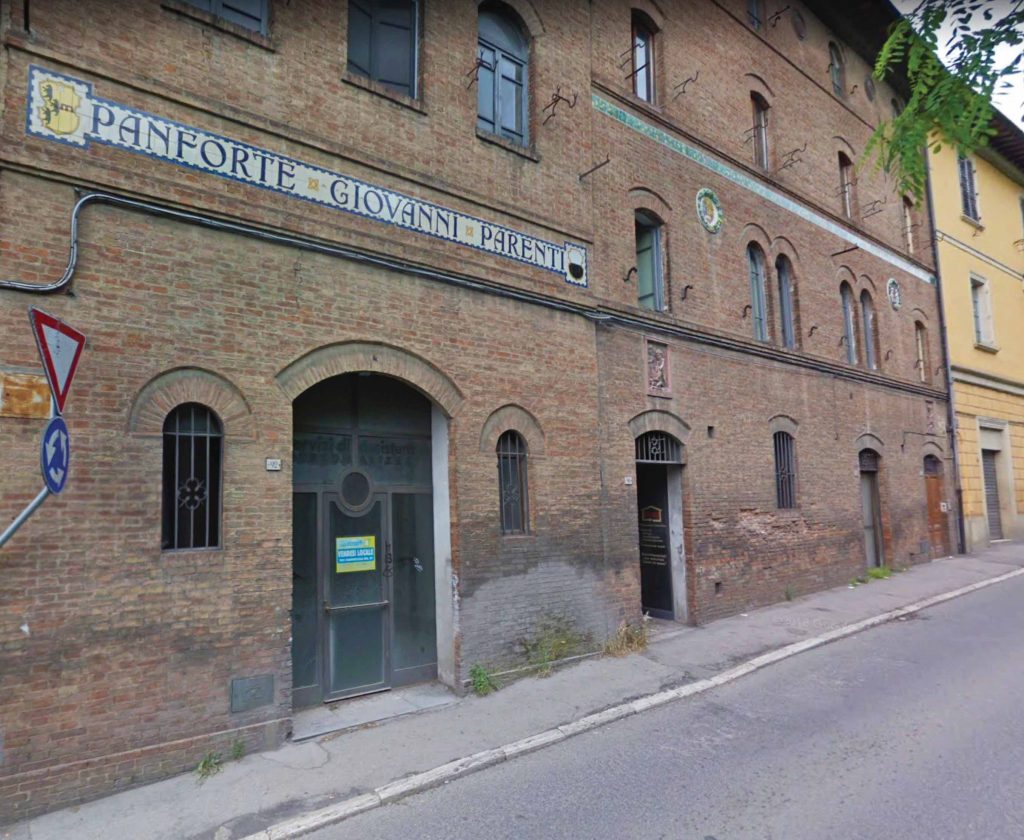