3.7 Historic trades in a modern city

For centuries, the Piazza del Campo has been the centre of Sienese life and economy, recorded as a market-place since at least 1169. Since the Middle Ages there has been a daily market here and a weekly one, called the big market, for which people and goods came from both inside and outside the city.

The piazza was organised into sectors by what would now be called merchandise categories, to help make sense of buying and selling. At the big market there were all sorts of trades, from leather-workers to dealers in second-hand goods, from grocers selling produce from the countryside to vendors of cloth or meat.

Over time, some of the bulkier activities and those that affected the dignity of the piazza, such as the cattle market, were moved to the nearby Piazza del Mercato (market square).

Outside the Piazza del Campo, the rest of the city had shops and producers that left traces in the present urban fabric, in streets that are still called after the historic trades. 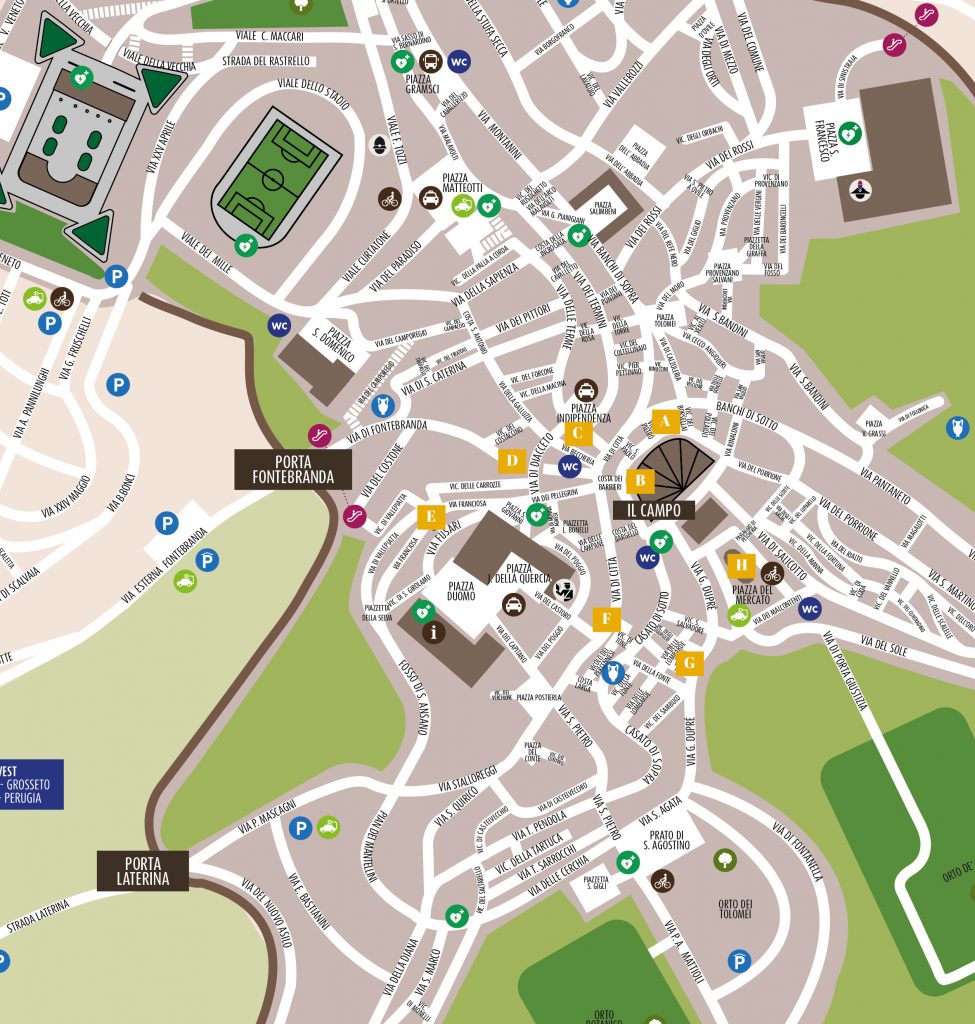 In this alley, also known as Chiasso Buio (noisy and dark), because it was completely roofed-over, were the shops of those who made and sold bags, which were very important in daily life as mediaeval clothes had no pockets. Near this alley is the Vicolo dei Pollaioli (Poulterers’ Alley), to which the poultry-sellers were moved. 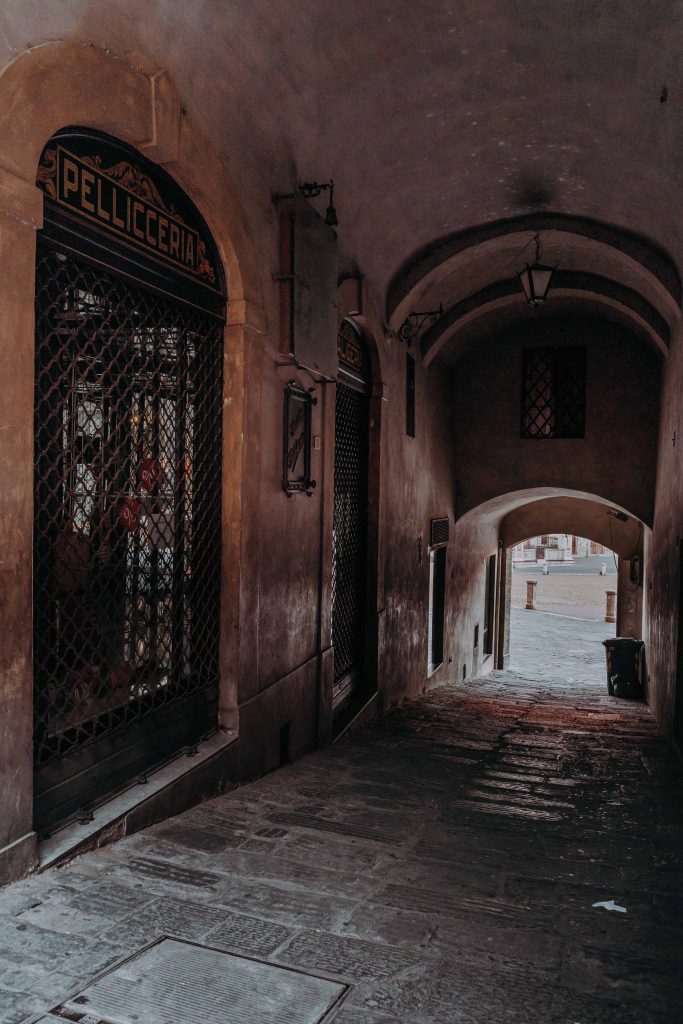 This is one of the loveliest facades on the Campo. During the fourteenth century, there were probably several different barbers (barbieri, from “barba”, meaning “beard”) in the area around here. In their shops, as well as beards and hair, they took care of other little problems of a “medical” nature with minor surgical interventions. 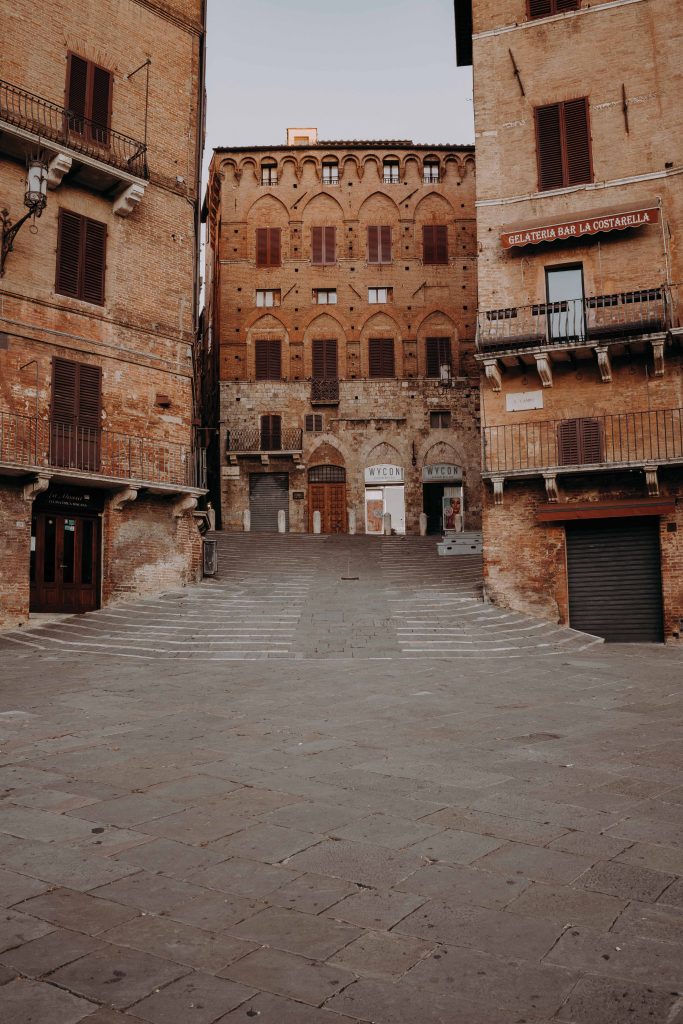 In the olden days, a beccaio was someone who sold goat-meat, and his business was beccheria. Over time, the term came to mean a butcher of any sort of meat. Butchering activities were moved further and further from the city centre by the Comune di Siena (town council) for reasons of hygiene and the smell involved. But along this road you can still see a fifteenth-century tombstone with an ox-head that recalls the street’s original business. 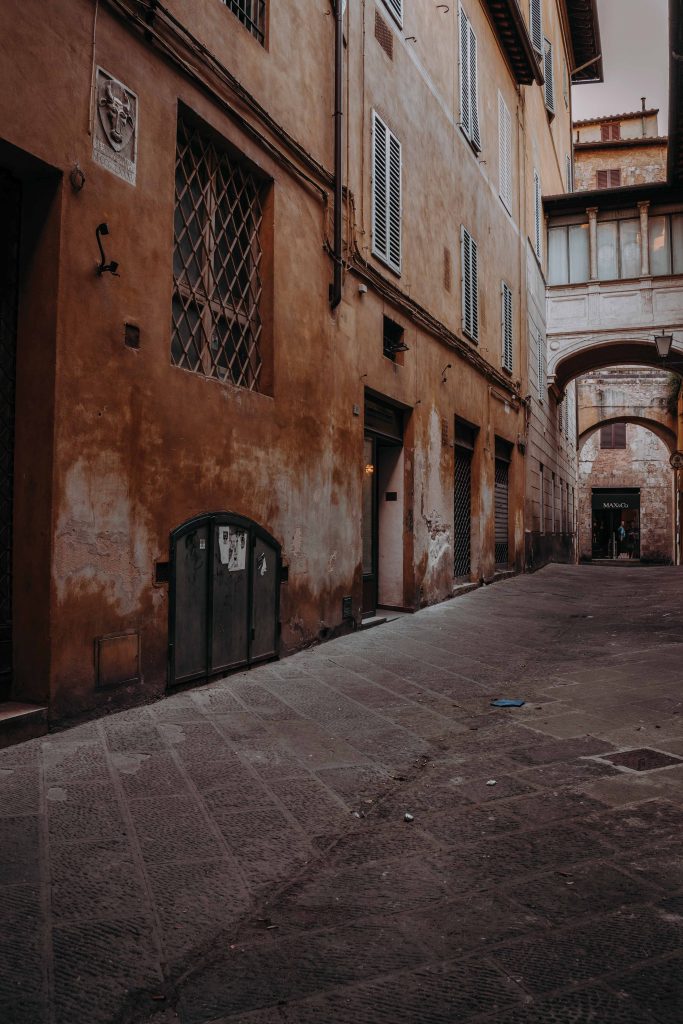 The diaccere or diacciaie were insulated underground spaces built to conserve compressed snow. The ice was used for preserving foods and the nearness of Via di Beccheria means it was probably used to preserve the butchers’ meat. For about half its length the street is a bridge, originally built of wood around the mid-twelfth century, then rebuilt in stone in 1226, and clearly visible from the area around the Costarella dei Barbieri. 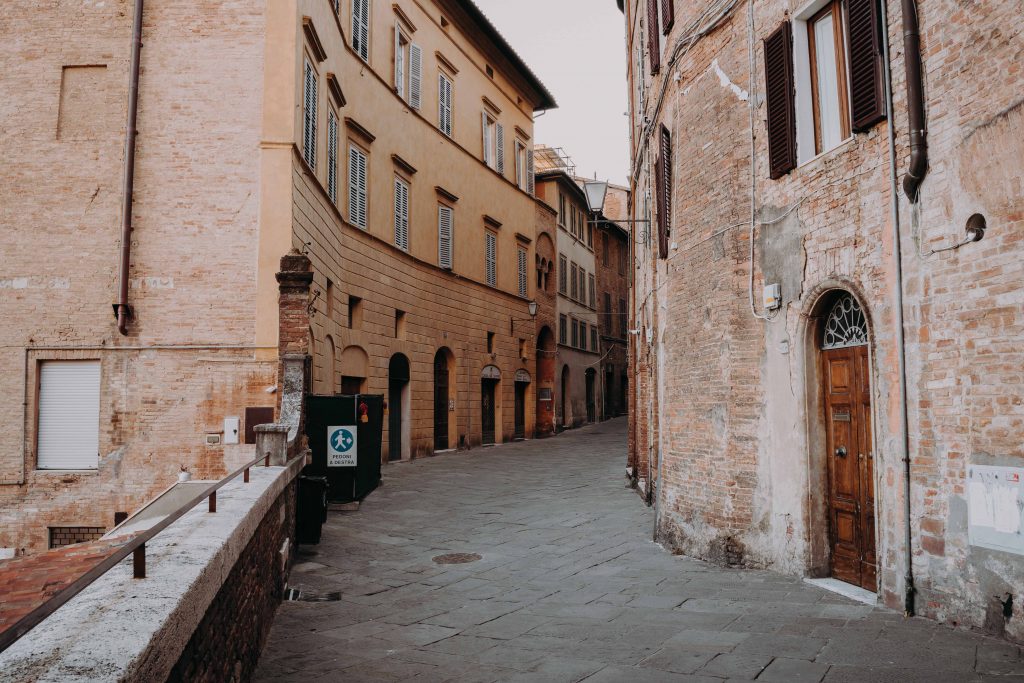 The name of this street, which skirts the Duomo (Cathedral) may come from the presence of the craftspeople who made the fusi (spindles) for spinning the woollen thread for weaving. There may also have been spinners working here. 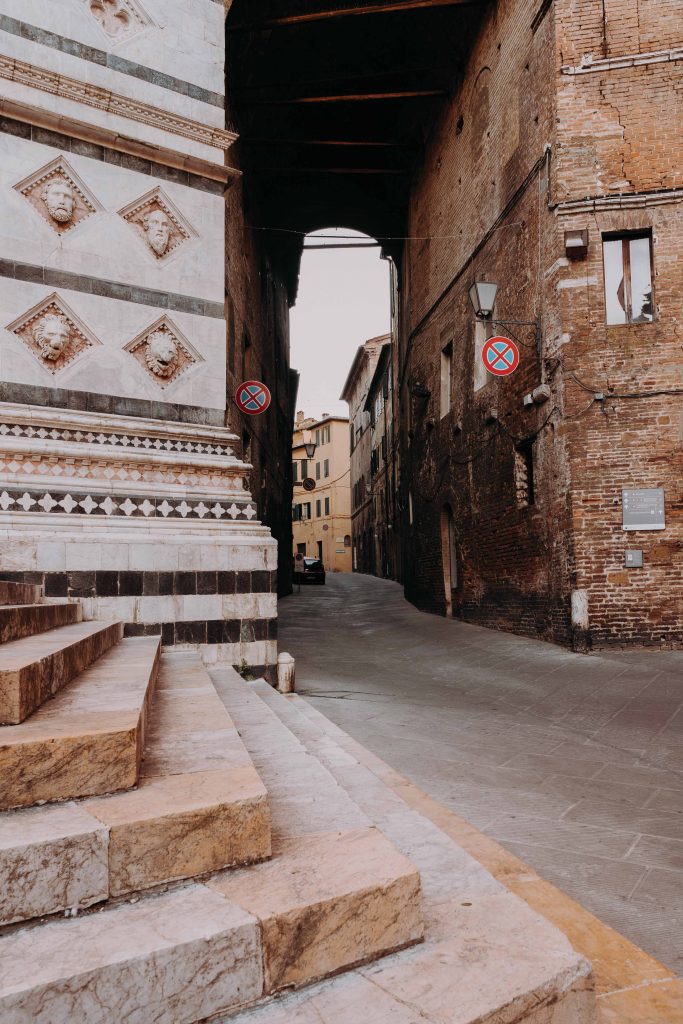 Via di Città, formerly Via Galgaria

The second part of the via di Città was called Galgaria, which is derived from the Latin caliga or soldier’s sandal-boot. From the twelfth century onwards, this area had many shoe-makers’ and leather-workers’ shops. 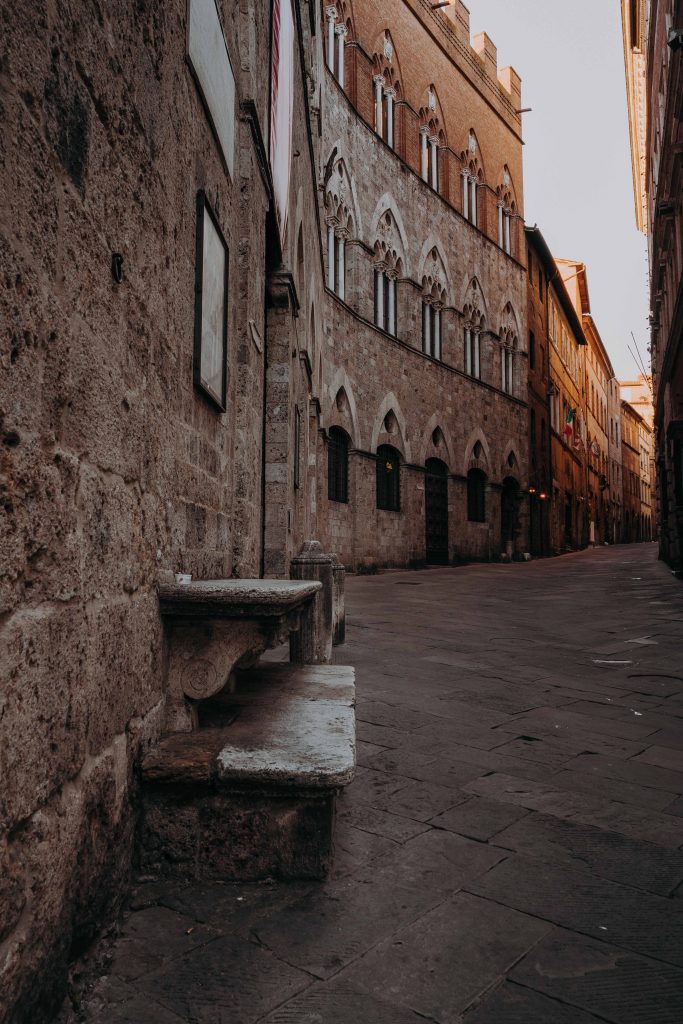 The name gives modern visitors few clues about its working life, but this little street is one of many in Siena that was called after the prostitutes who worked there. At the time prostitutionin 1832 was a regulated profession and one for which taxes were due. Lombarde was a synonym for “prostitutes” because many of the women who did the job came from the north of Italy, generically known at the time as Lombardy. With pure Tuscan irony, other roads named after this business, which was quite widespread, have names like Via delle Vergini (Street of the Virgins) or Via del Giglio (Lily Street). 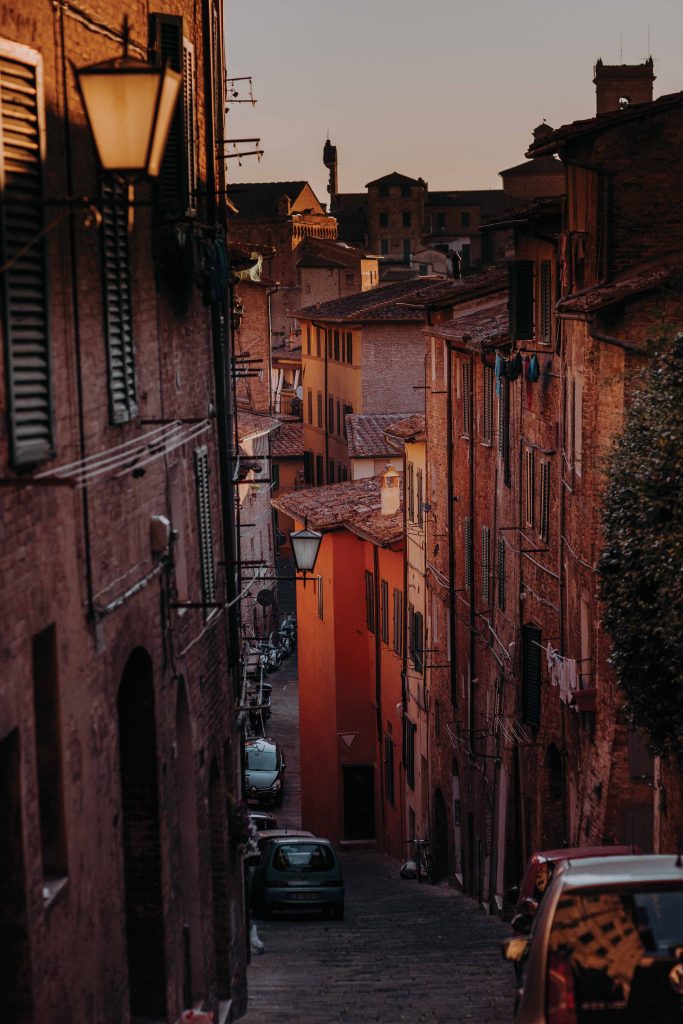 After the Palazzo Pubblico (town hall) was built, less noble activities, like the cattle market, were moved to this square to allow the Campo the dignity it deserved as the heart of the city.

The building in the middle of the piazza, which the Sienese call the tartarugone (big tortoise), was built during the nineteenth century to allow the commercial activities of the market to be organised in a more orderly and respectable fashion. 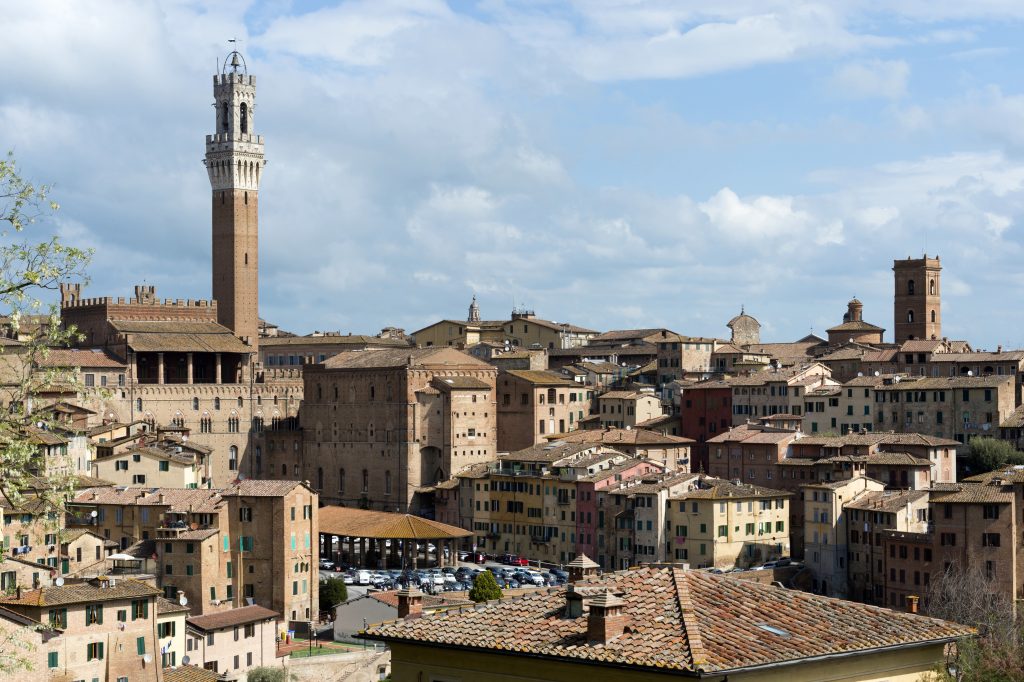