5.4 His majesty the truffle, the king at the table

A mixture of water, fire and lightning thrown by Zeus near an oak tree. Is it a recipe for a powerful magic potion? No, it is the ancient belief that in the 1st century A.D. became widespread concerning the birth of the truffle, the precious tuber with its characteristic and unmistakable perfume considered as a precious stone, for its value and sublime taste. The truffle is a prince product of the Lands of Siena and can be found all year round in its four main varieties: the king of the table, the prized white truffle, the prized black truffle, the bianchetto or marzuolo truffle and the scorzone truffle. 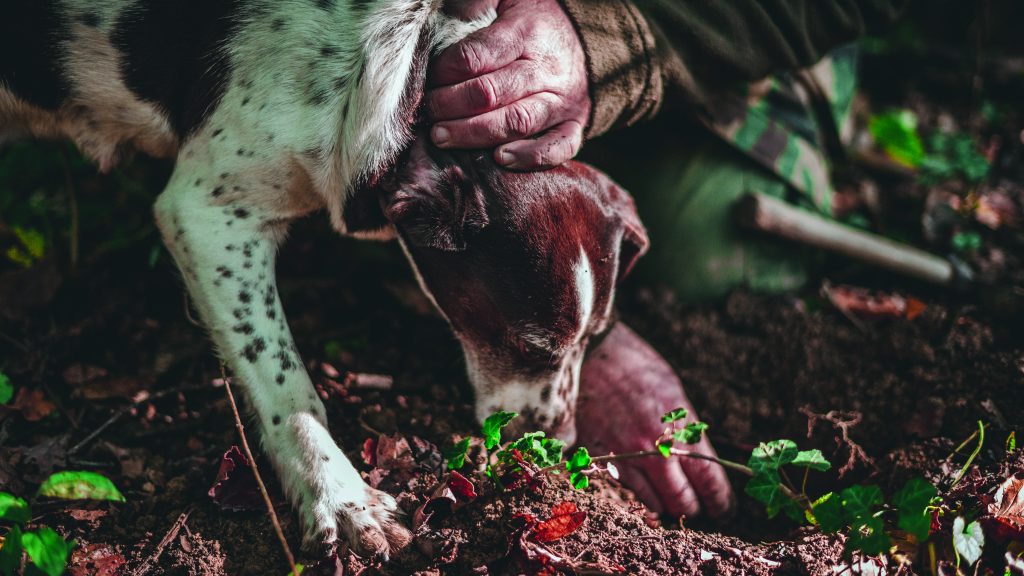 The truffle as a gastronomic product is not a novelty of the modern age. The Romans already appreciated it and enjoyed it, as they had known it thanks to the Etruscans and even further back in time, the first traces of truffle on the table can be found in 79 A.D. The truffle brings with it a thousand legends and numerous tales related to its properties. One of them is that this precious tuber has remarkable aphrodisiac properties especially due to the prodigious sexual activity of Jupiter, by virtue of which the truffle was dedicated to Aphrodite, goddess of love. Still today it is believed that the truffle is able to awaken desires and passions, especially when combined with a good wine and a quality dark chocolate. Caterina dei Medici was also a true truffle admirer and introduced and made the French court admire the white truffle from the Medici castle of Cafaggiolo (Barberino di Mugello, Florence), where Lorenzo the Magnificent and Cosimo I lived.

In the province of Siena there are several areas where the truffle was born as a result of a perfect symbiosis with the surrounding nature: the tuber reproduces and grows near hazelnuts, poplars and willows, hornbeams and Turkey oaks, oaks and chestnut trees becoming a unique product with an incomparable taste all the time. The Crete Senesi, in an area stretching from Asciano to San Giovanni d’Asso, is the area in which the white truffle is found. The area is well known for the food and wine events that are held every year from the end of November to December to celebrate the “white diamond”.

In the village of San Giovanni d’Asso, in the municipality of Montalcino, it is also possible visiting a ‘sensorial’ museum entirely dedicated to truffles. The white truffle is characterised and rendered special by the conformation of this territory to the south of Siena: clayey hills and lunar looking gullies and small woods. One can also find the white truffle in the territories of Pienza, Monteriggioni and San Casciano Bagni. The Montagnola Senese, on the other hand, is the best place to find the black truffle, present in the sparse and bright sunny woods and on calcareous soils. Black truffles can also be found in Chianti and Valdichiana. The scorzone originates in the woods of Chianti and in Val d’Elsa and Val d’Arbia and it is possible to find the white truffle, present in particular in the ditches at the bottom of the valley, and the marzuolo truffle.

If the white truffle is best tasted raw, the cooking enhances the fine, black, wrinkly truffle, which can be found from November to March in the calcareous soils of the Montagnola Senese, Chianti and Val di Chiana. From January to April it is possible to look for the bianchetto or marzuolo truffle, while the undisputed “king” of summer is the scorzone truffle, black and with yellowish pulp, which can be tasted from June to November. 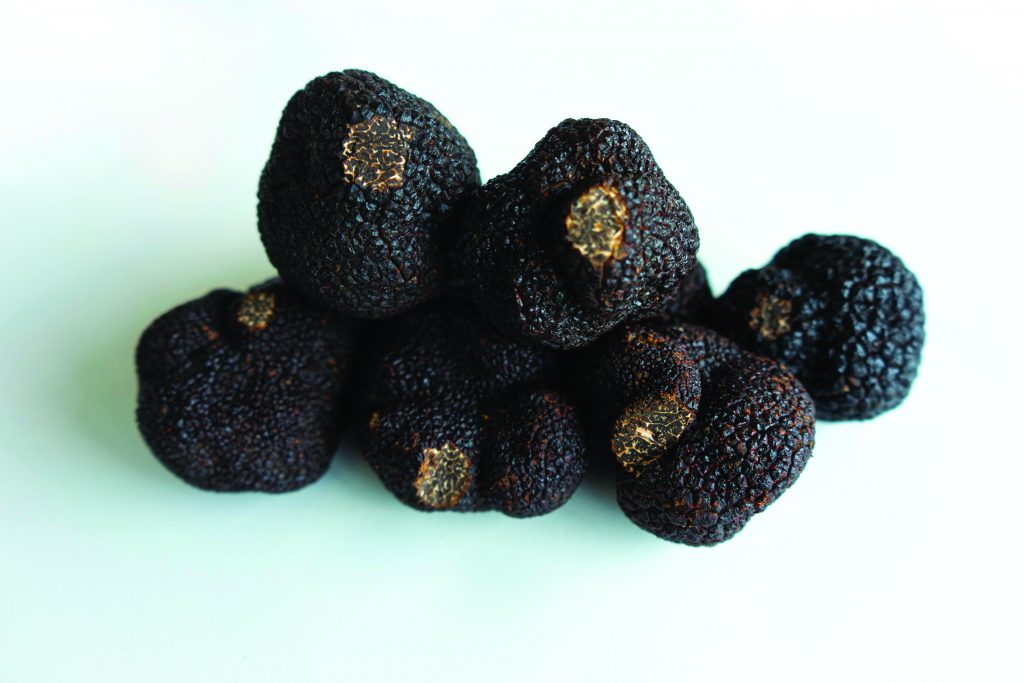 But what is the truffle? Also called hypogeum mushroom, it has a globular and irregular shape with dimensions that can vary from a few grams to larger pieces. They are covered externally with a smooth or wrinkled “skin”, while internally they have many streaks that give them a “marble” appearance, with a colour that can vary from grey to yellowish or greenish. The truffle releases its unmistakable scent, different for each variety, only when it is ripe. This is exactly the reason why it is difficult for a single man to identify a truffle in the under wood: his precious ally is the dog, preferably of the Lagotto breed.

Though, for the more curious, it is good to know that the most suitable animal to find truffles is the pig, due to its highly developed sense of smell. What disadvantages it, however, is its slow and awkward behaviour that would prevent it from making agile movements between branches, bushes and sometimes inaccessible ground in order to find the much desired trophy.

The Lagotto, which is well trained by its master, wanders through the woods sniffing the ground and, always under the attentive supervision of its master, the truffle hunter, when it smells the scent of truffles, begins to dig. And it is here that the truffle gatherer ‘armed’ with a spade, releases the truffle from the ground where it is born and brings it to the surface, paying attention to cover the ground to allow the spores left by the tuber to reproduce. For the truffle hunter the satisfaction of having found a truffle, for his four legged friend a recognition made of gratitude, dry bread, sometimes cooked ham or mortadella.

And if you wish to experience the thrill of becoming a truffle hunter for a day, in the province of Siena it is possible. During the festivals in Asciano and San Giovanni d’Asso, the Tartufai del Garbo and the Associazione Tartufai Senesi organise the search for truffles in the truffle-grounds for everyone. It is thus possible to experience the emotion of finding a truffle and then tasting it.

For those who, instead, would like to become a real truffle gatherer in Tuscany, and therefore in the province of Siena, it is good to know that the hunting is a free activity in all non-cultivated lands and in the woods, while in the controlled and cultivated truffle grounds it is restricted. A regional law regulates the hunting and harvesting of truffles, which must only take place at certain times of the year and prohibits the picking of immature truffles which, being superficial, could be easily identified.

Truffles cannot be picked when the ground is wet or by hoeing, only the spade can be used, always remembering that the hole to pull out the precious tuber must be proportionate to the size of the mushroom. Finally, the damaged truffle must be buried to allow the spread of spores. The Province of Siena grants a special certificate of suitability for hunting after passing an examination to which must be added an authorisation card issued by the municipality of residence and valid for five years, which entitles the holder to search for and pick truffles throughout the national territory. 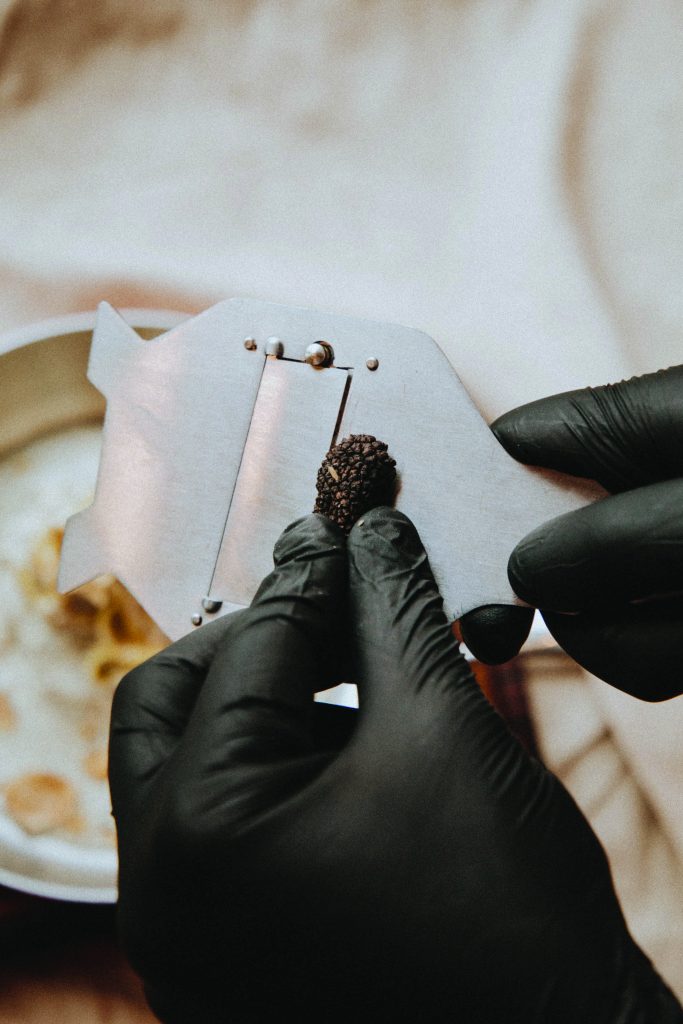 A unique experience, that of truffle hunting, but for those who do not want to get tired it is possible to buy it during the food and wine festivals dedicated to it and in the many traditional markets that every year take place in the Tuscan villages: from Asciano to Buonconvento, through Sovicille, San Giovanni d’Asso and Siena at the traditional Market in the Field that is held in December. Remember, however, that fresh truffles must be eaten almost immediately; if you really need to preserve them, they last 1-2 weeks at most, wrapped one by one in porous paper, which must be replaced every day and stored in the fridge in airtight glass jars. Truffle hunters also recommend putting them in a glass jar filled with raw rice which absorbs the humidity. You will thus have a truffle that is always good to eat and an extraordinarily fragrant rice to bring to the table.

Truffle and more. From this precious tuber you can get many other products that, we recommend, to buy always and only from local traders who can guarantee traceability and freshness of the product. The flaky truffle can be found dipped in honey for a very unique product to be tasted on the typical pecorino cheese produced in Siena. And then the truffle flavoured butter to spread on croutons or to use as a condiment for pasta, the black truffle in oil and in truffle sauce as a condiment for pasta and croutons.

It is a unique and very versatile product that matches with savoury but also with dessert and with eggs and cheese, very precious also for the environment. The truffle is, therefore, considered an “environmental sentinel” for its extreme difficulties in reproducing itself in unhealthy soils. A final testimony to the genuineness of the territory of the Lands of Siena of its breathtaking landscapes, the unique experiences that can be enjoyed and the good food that can be tasted to please body and mind.