“It is particularly delicate and good”. This is how Pope Pius II, the Pontiff of Pienza, recorded it in his comments in the 15th century. An ante litteram review we could say today. But that of Enea Silvio Piccolomini, after having tasted Cacio, one of the delicious pecorino cheeses of the Crete and the province of Siena, is certainly a prestigious certificate that witnesses the tradition, the quality, the knowledge, of a product that has made the history of agrifood production and of a product that should not be missed in restaurants and everyday tables. A great gourmet of Pius II pecorino cheese, to the extent that there are documents that testify how he marked the cheeses that came from the best farms in order to be able to recognize them and ensure that they were not missed.

But the cheeses and products made with sheep’s milk have always been present in this territory. Shepherding as a fundamental activity for the survival of man. This type of “cacio” dates back even to the Neolithic period, as some milk processing vessels found in a prehistoric village near Pienza seem to demonstrate. Let’s think of the Etruscans: they did it in the same meadows where sheep still pasture today; modern dairy farms and dairies are often found next to the remains of that ancient civilization. In fact, it was in Etruscan times that the art of cheesemaking was perfected, to respond to the need to preserve a food with a high nutritional value such as milk. With this goal in mind, the Etruscans were the first to use vegetable curds and produce large sized forms, suitable for feeding a family for a long period. 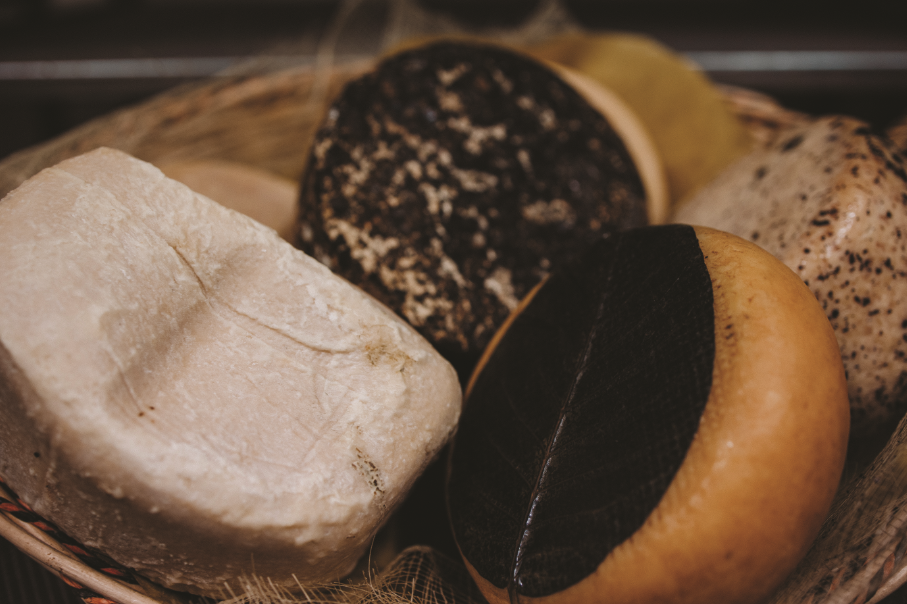 Even Pliny the Elder, tells in his Naturalis historia, that the Etruscans used to produce large cheeses of excellent pecorino, and many centuries later it was Lorenzo de’ Medici, known as Il Magnifico, who appreciated their perfumes and flavours. As the years went on, we arrive at the end of the 18th century when the Royal Economic Society of Florence even had a study carried out on the production of cheese in Val d’Orcia, bringing to light a curious fact: “…the young girls who have learned the art of making Pecorino cheese acquire a great reputation in the town, and this skill of theirs is considered a talent. A curiosity, the famous Cacio di Pienza, in the past was known as the Pecorino of the Crete Senesi. It is discussed in the notorious Jacini enquiry the great parliamentary enquiry of the Kingdom of Italy that from 1877 to 1886 examined the conditions of agriculture in the country, which ended with a detailed report a precise definition is read: “Dicesi Cacio di Pienza said that an excellent product is made in and around the Val d’Orcia, following a system of processing dictated by the most ancient local tradition”.

But besides the Crete Senesi and the Val d’Orcia, the tasty pecorino cheese is produced in every corner of the province of Siena. From the countryside of San Gimignano to Valdelsa, from the hills around Siena to Val di Merse, passing through Valdarbia and Valdichiana. The cheesemaking facilities in the area are not, for the most part, large, and in some cases they are arranged for company visits and product tasting rooms directly on the farm. Shepherding, especially in some areas of production, in the South of the Sienese province, was made possible thanks to the emigration of Sardinian shepherds to Tuscany at the turn of the seventies and eighties, and made it possible to continue this traditional production, combining the flavours and forms of the Sienese cheesemaking art with the knowledge of Sardinian shepherding. 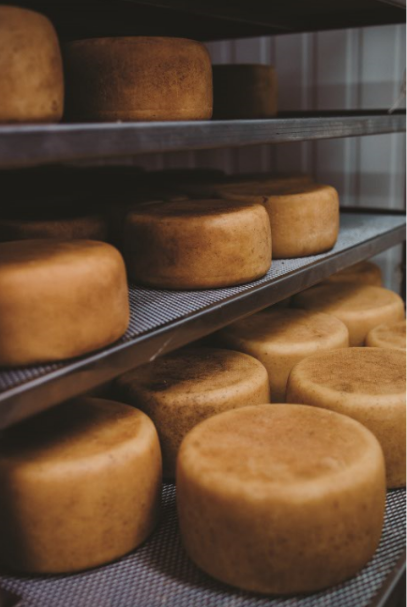 It is called “cheesemaking”, the production process through which milk is converted into cheese. In a word, an ancient and yet constantly evolving practice is enclosed. Over time technology has refined and improved the production process, but the dairyman’s touch remains decisive in making each cheese unique. The production of Pecorino is a process consisting of phases, each of which contributes to make it unique.

It starts with the milking: the sheep, of Sardinian, Comisana, Apennine and Massese breed, are milked once or twice a day, for a period that can vary from 100 to 200 days. Each lactation produces an average of 70 to 300 litres of milk, depending on the age of the animal and the breed. The milk then arrives at the dairy where it is immediately processed; then the different phases follow one another: the addition of rennet is very important, which allows the coagulation of proteins and the milk to pass from a liquid to a semisolid state. Then the curd is separated, a product between milk and cheese. When the curd is ready, it is separated into more or less large lumps; and after breaking, it is put inside special moulds to favour syneresis, that is the draining of the whey and giving shape to the cheese. After moulding, it is crucial to drain the whey and salting it. At this point there is the maturing phase, where the temperature and humidity of the environment in which the cheese matures are fundamental, a period that can vary from a few weeks to a few months, depending on whether you prefer a fresh, semi matured or mature cheese.

Sienese pecorino has a cylindrical shape and sizes ranging from 1 to 2 kg. The paste, which is straw yellow in colour, is soft and sweet if the cheese is fresh, spicy and brittle if it is mature. Very popular among consumers is the raw milk pecorino, a classic form of only raw sheep’s milk with a minimum fat content of 26%. The cheese has a diameter of 16-18 cm, a height of 8-10 cm, a straight or bowled heel and a weight of about 1.5 kg; the crust, treated with olive oil, has a natural colour, while the colour of the paste ranges from creamy white to pale yellow; the minimum maturation period lasts 60 days. Raw milk pecorino has a sharp aroma, savoury to the taste with organoleptic characteristics typical of pecorino cheese. Raw milk pecorino has a traditional flavour due to the quality of the milk obtained from sheep raised in the pasture and the typical transformation process. In the past centuries it has been the main food of sharecropping families and direct farmers in the province of Siena, who used to produce pecorino cheese directly on the farm. 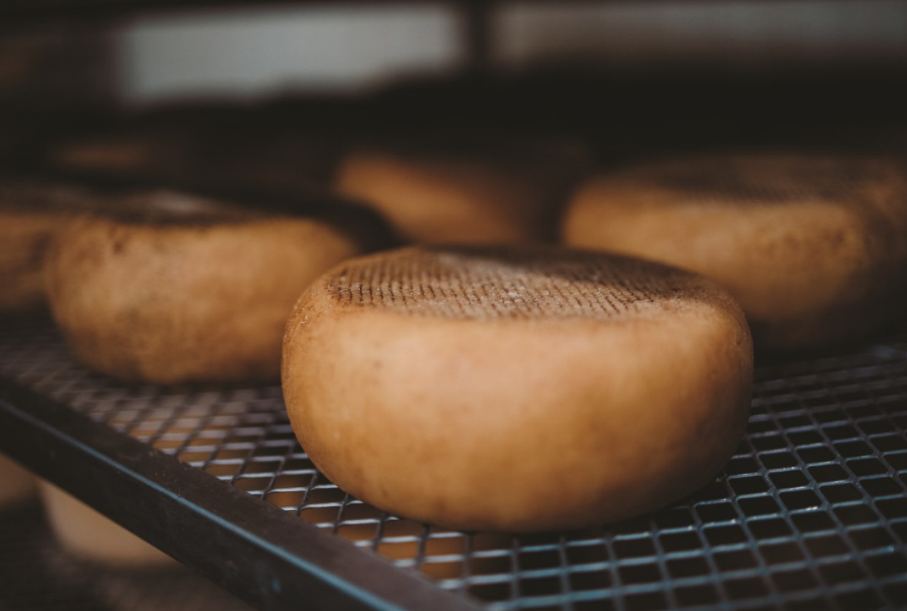 The traditional character of pecorino cheese from the Sienese hills is linked to the particular processing technique, which has remained unchanged over time and involves the use of special tools and utensils (such as fir wood planks for maturing), which influence the typicality of this cheese. The flavours can change based on which period of the year we find ourselves, that is according to the aromas and scents of the herbs, such as marzolino, oval shaped, produced with milk pressed at the beginning of spring, when the pastures offer the most tender and fragrant grass.

There is also a PDO (Protected Designation of Origin) of pecorino cheese. In the province of Siena, in fact, Pecorino cheese is also produced, the Community trademark with the highest guarantee of excellence of a European agrifood product. Every form of Pecorino Toscano PDO is controlled at the origin and complies 100% with the production regulations. The mark is affixed in ink on soft cheese and hot on mature cheese. On the prepackaged portions the marking is made on each single package, as long as it takes place in the area of origin. The Pecorino Toscano PDO cheese must bear the label approved by the Consortium of protection, the mark of origin including the identification number of the dairy producer and the mark to ensure compliance with the specifications. It is produced exclusively with whole milk from sheep raised in the area of origin. In Tuscany, the fourth largest region in terms of the number of sheep, there are over 471,000 and they are mainly extensively reared: they pasture in the open air most of the year and are kept in sheepfolds only during the coldest months. Nutrition is also taken care of in detail: at the time of milking they receive a supplement of nourishment with green or preserved forage (in this case mainly hay), produced in the area of origin, which they bring to the animal, and therefore to the milk they produce, higher levels of Vitamin E and Vitamin A. Pecorino is a real king of taste, to be eaten at the table either in the fresh or seasoned version, possibly together with an excellent glass of wine; but also as an ingredient, grated or flaked, to enrich many dishes and recipes, starting from those of the Tuscan gastronomic tradition. 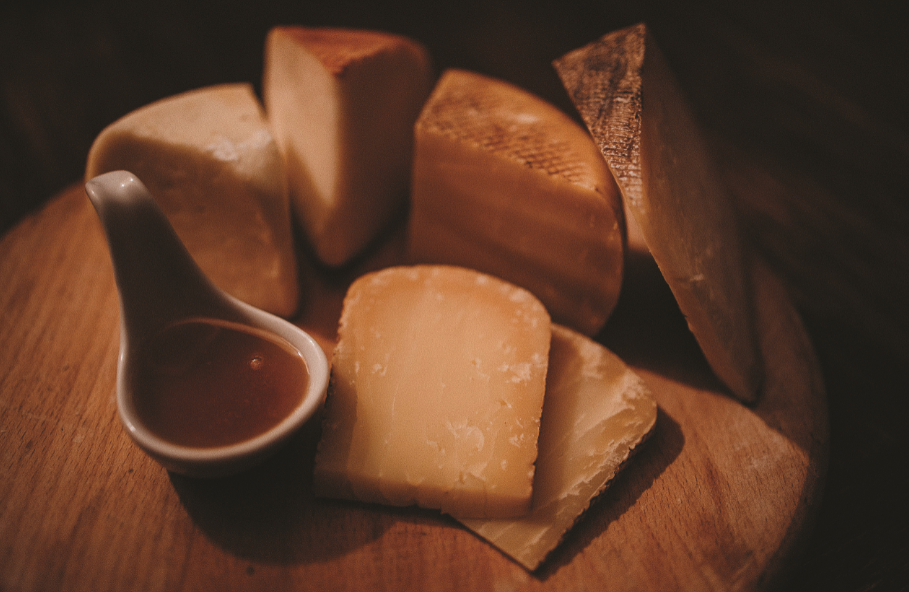 It can be savoured pure with bread or become the protagonist of refined combinations with jams, honey or fruit mustards. In the kitchen it is often used as an appetizer accompanied by cold cuts, as the main ingredient in traditional recipes or to stuff focaccia, savoury pies, ravioli, meat rolls or vegetables.

So all that is left to do is to search for an excellent Sienese pecorino cheese, in one of the taverns or restaurants in Siena and its province, or directly in the farms and dairies that produce it and then receive advice, according to your taste and seasonality. Everyone can find their ideal pecorino: from the basic one made only with sheep’s milk and seasoned, or those flavoured there are truffle, saffron, chilli pepper even seasoned in walnut leaves or in the pomace of Sangiovese grapes. The taste is served.