5.8 Saffron, the yellow gold of the lands of Siena

It was once said of a happy and jovial man “he slept in a bag of saffron”. Today, the Crocus Sativus L., has become one of the niche productions of excellence in Tuscany and a few other parts of Italy, Abruzzo and Sardinia. In the Grand Duchy, two of them are the most outstanding: that of San Gimignano, with protected designation of origin since 2005, and that of Val d’Orcia. The history of this spice in the Siena area is fascinating, full of meanings and stories. But that of the saffron is a story that even survives legends such as the one that narrates the burning but pure love between Crocus and the nymph Smilace, a love that the gods punished by transforming the unfortunate Crocus into a plant with a graceful and precious flower. In some cases the origins of saffron have even been attributed to Mercury who, having accidentally hit with a wrong throw of his disc Crocus and to remember his friend’s memory, had stained this prodigious plant with his blood. 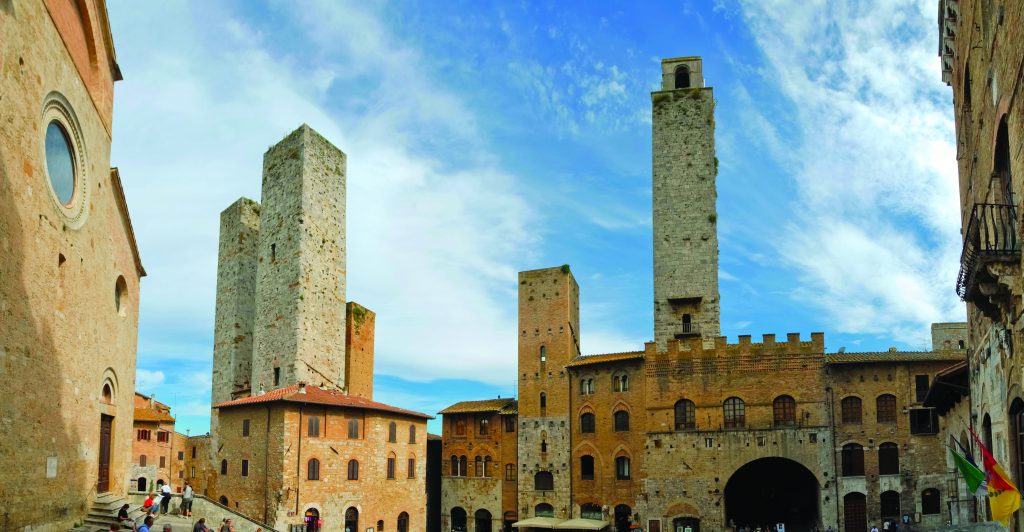 In the land of Siena we have news of this plant since the XIII century. In San Gimignano, particularly, the cultivation of saffron has been historically confirmed since 1200, to the extent that it has even been possible to trace the exact location of the land used for its cultivation. The oldest documents also indicate the names of the families involved in production and marketing. It is not so surprising that the profits derived from these activities were so high that they made the fortune of many families, some of which decided to use them also in the construction of the towers, which are still the pride of the town today. Originally from Persia, local producers sold it on several Italian markets and exported it to Egypt, Tunisia, Syria and the Holy Land with the support of ships and commercial structures from Pisa and Genoa. And all this happened while the other spices went the other way. A singular turnaround of the figures of the seller and the buyer which, besides suggesting the great commercial ability of the merchants of San Gimignano, shows the very high level of quality reached by the product.

A product mainly used as a medicinal plant or as a dyeing plant but since the thirteenth century, its use has been in the kitchen as an excellent seasoning for meat. Given its high quality, once again is no wonder that saffron appears in archive documents as an object of tributes and gifts to emperors such as Frederick II and kings such as Charles and Robert of Anjou; but also as money to pay soldiers and honour the instalments of loans taken out by the commune. It was a precious spice and for this reason it was often exposed to fraud and sophistication at that time. This is why the commune repeatedly issued very strict rules in the statute to ensure its weight and quality. 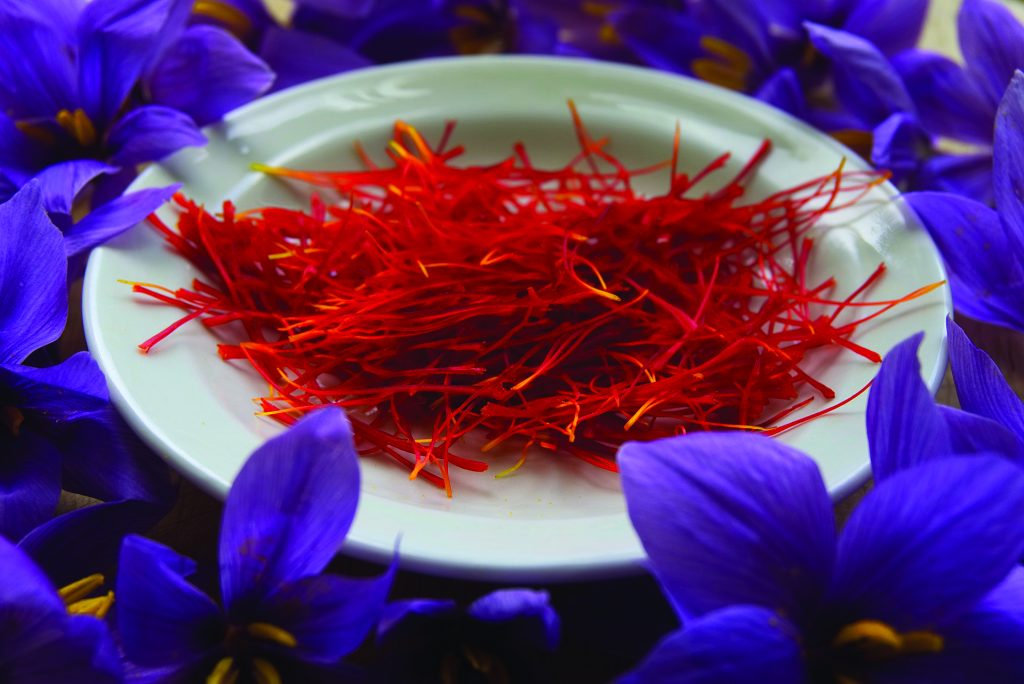 Saffron became over time a product of absolute value and this is why dyers came to buy it from many places, and even “those in Florence” travelled to get it. The fact that saffron had a great value also reminds us of the most famous Florentine market practice, that of the merchant Francesco Balducci Pegolotti, which can be traced back to the first half of the fourteenth century. Talking about the equivalences between the weights and measures of Acre and the weights and measures of Florence tells us that 10 pounds of “saffron of Florence” was equivalent in Acre to 10 and 3 ounces. On the other hand, the “Tuscan saffron” is more widely remembered for the commercial square of Pisa and the definition returns in a specific and long list of “spices” drawn up by Pegolotti in his work, which elsewhere, as an expert man of commerce, assesses the Tuscan one as the “best” saffron, on the same level as the Abruzzo, Marche and Catalan saffron. In the middle of the 13th century, San Gimignano had a monopoly on the sale of this spice in central Tuscany.

The saffron crisis occurred at the beginning of the seventeenth century and would still be going on if a few years ago producers and institutions hadn’t done a patient work of recovery in the name of tradition. The PDO that the product is proud of today is the best recognition of a production excellence and at the same time the tribute due to an extraordinary history. For many centuries saffron’s most appreciated characteristic has been the possibility of multiple uses. Until the end of the 16th century crocus was used for dyeing wool and raw fabrics. The operations were strictly regulated and the “pannaiuoli” or “lanaioli” had to undergo precise regulations and the Municipality strictly supervised the activity. Another widespread form of use was for medicine. The documents of the splendid Spezieria di S. Fina illustrates how saffron was an important component in the pharmacopoeia of the sixteenth and seventeenth centuries. The ancient recipe for an elixir, found in a 1631 box, which had been sealed to highlight the preciousness of its contents, could generate particular curiosity. The use of saffron in painting should not be forgotten either. The paintings of the Sienese and Florentine school, but not only these, are an extraordinary testimony to this. 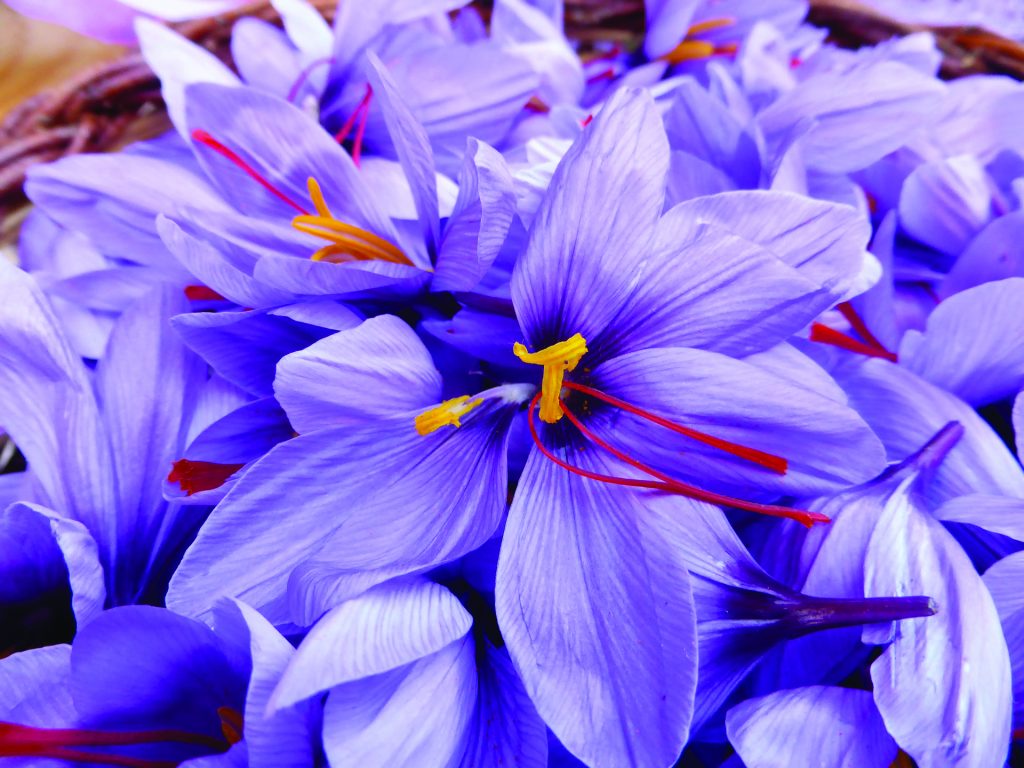 However the Saffron was much sought after as a seasoning, not only for its aroma and flavour but also for its colour, which contributed to making food appealing. The oldest document in San Gimignano on the use of saffron in cooking is a resolution of the Community Council of 1228 authorising the reimbursement of mission expenses incurred by Podestà Gregorio. He and his soldiers had lunch “cum uno chapone, una ghallina et quatuor fercolis carnium porchi et in ovis et pipere et croco”. The saffron of San Gimignano PDO is produced by drying the stigmas of the flower Crocus sativus L., exclusively in the territory of the municipality of San Gimignano. It is preserved in whole orangered filaments and has a very intense flavour. The composition of the soil is usually sandy and this gives the saffron its extraordinary characteristics. Its quality is mainly attributable to the chemical components: the crocin, which is responsible for the yellow colouring activity; the picrocrocin, which gives it the flavour; the safranal, which is responsible for the aroma. On the basis of an analysis of these three components, the product is classified internationally into four product categories that certify its quality. The results of tests carried out on samples of saffron from San Gimignano have determined that it belongs exclusively to the first category.

The Crocus is a small flower with six petals, pink purplish in colour. Inside its corolla a stylus splits into three scarlet red threads (stigmas), which make up the saffron itself. The cultivation soil is carefully worked and then left to rest during the period from November to August. The reproduction of the bulb that sprouted the previous year takes place in spring, generating two new bulbs. During the month of August, the best bulbs are planted very close to each other, in single or double row. During the flowering period, harvesting is done manually, every morning at dawn, to prevent the sun from opening the flowers. This period extends from midOctober until the first week of November. The blooming is carried out in the evening and consists of separating the stigmas from the stamens by hand. During the same day, the peeling is performed, that is the removal of the three red stigmas from each flower, which are dried at a controlled temperature of less than 50°. 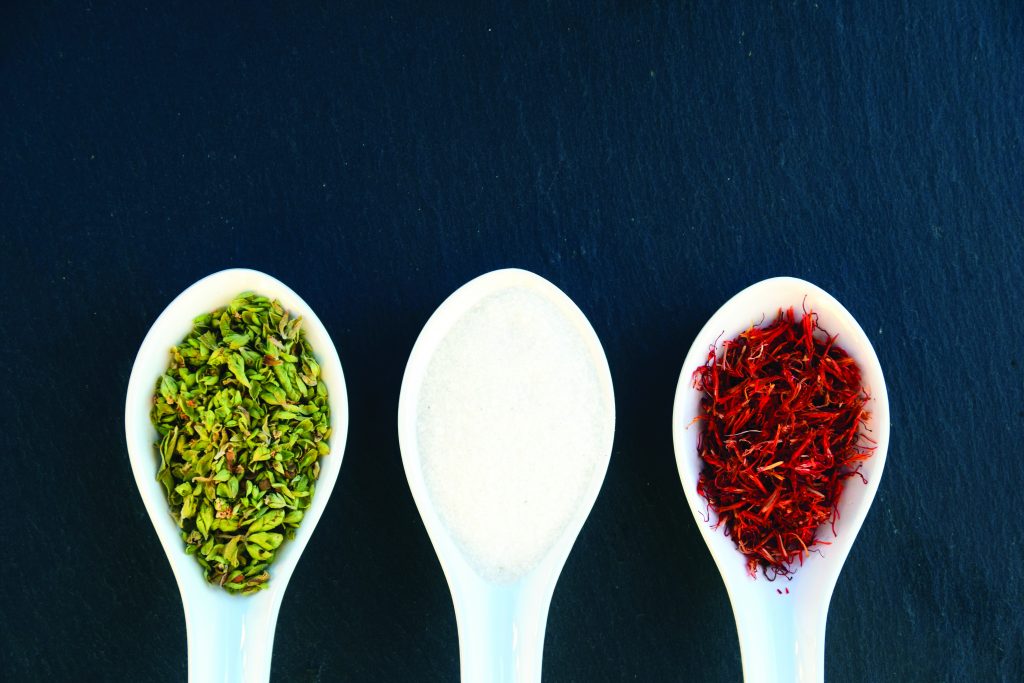 The saffron of San Gimignano is placed on the market leaving the stigmas in threads. The choice of presenting the product not in powder, but in its natural state, aims at preventing any possible sophistication. If the product was ground, it would be difficult for the consumer to distinguish authentic saffron from that obtained by replacing or adding foreign components. Moreover, Pellegrino Artusi, the father of our gastronomy, made suggestions in this sense: “If you have a bronze mortar at home, buy saffron in the wild, pound it finely and melt it in a drop of hot broth prior to throwing it into the rice, which you will serve with Parmesan cheese”. The advice is still valid today. To produce one kilogram of saffron you need about 200,000 flowers and 500 hours of work. It is exactly this art of harvesting and manual processing that justifies the high cost of this spice.

Saffron is easily preserved when stored in glass containers, taking care to avoid exposure to sources of light and humidity. It is recommended to consume it within one year of purchase. It is used in gastronomy, in the bakery industry and in pharmacies. Saffron, in fact, adds its unique taste to numerous preparations, from rice or fresh pasta first courses, to meat or fish second courses, in delicious recipes such as saffron rabbit bites, saffron tripe or saffron mussels. It is also used to flavour and give colour to desserts and ice creams. It should be used modestly to avoid too pronounced odours. The product is marketed all year round in the Saffron of San Gimignano PDO type in stigmas, in sachets or in containers of different weight from about 0.1 to 1 g.