A challenging stage of 25.79 km which takes a little under 7 hours. Leave Siena through the Porta Romana, past Certosa di Maggiano, taking a narrow asphalted lane in the direction of Paterno. On a succession of white tracks you get breathtaking views, with the skyline of the mediaeval city still visible behind you.

Reaching the Grancia di Cuna, you continue along the Crete Senesi, skirting the edge of Monteroni and passing through Quinciano. Not far away is the fortified town of Lucignano d’Arbia with its Romanesque parish church of San Giovanni Battista. After Lusignano you reach the end of the stage at Ponte d’Arbia.

For refreshments, you have to take a detour from the route at Isola d’Arbia; you can also find water (very scarce) at the Grancia di Cuna.

After leaving Siena by the Porta Romana, the Via Francigena heads south. For a while it follows the main road 2, along which you can still see the old hospitals: Santa Maria di Belém (Our Lady of Bethlehem), the Casa del Lazzaro and two others on the Colle di Malamerenda and the Coroncina. At Isola d’Arbia there is a parish church that has always been a goal for pilgrims walking this route: the Romanesque church of San’Ilario . The route then passes alongside the Grancia di Cuna, a fortified farm where food and grain belonging to the Spedale of Santa Maria della Scala in Siena were stored. 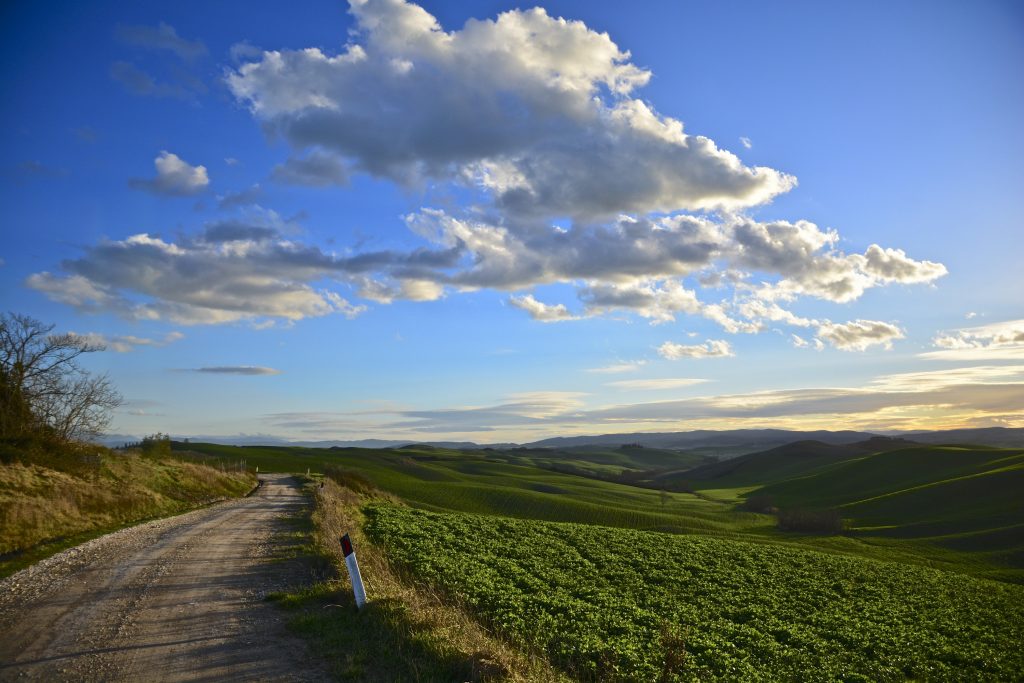 Monterone d’Arbia, 13 km from Siena, has always been considered the gateway to the southern part of the province of Siena, a countryside crossed by the Via Cassia and surrounded by stunning views.

After Monteroni you come to Lucignano, a thirteenth-century fortress-town, where you can see the Romanesque parish church of San Giovanni Battista (St John the Baptist).

The fourteenth stop on Archbishop Sigeric’s journey is Ponte d’Arbia, at the foot of the Crete Senesi, the old wasteland of Accona. During the Middle Ages this land was partly covered by water and, where the Isola d’Arbia rose there was a little Romanesque church: Sant’Ilario, where French pilgrims used to stop.

Continuing along the Crete Senesi you come across a beautiful frescoed cloister: the convent of Monte Oliveto Maggiore, which certainly merits a visit.